Dyson Wins Big at Daytona in Trans Am Finale

The Trans Am Series presented by Pirelli TA/SGT/GT drivers delivered another spectacular finale at the Daytona International Speedway on Saturday to close out the 2019 season with a title-deciding thriller.

Chris Dyson needed everything to go his way to overcome the points advantage of Ernie Francis, Jr. and claim the title in his No. 20 Plaid Ford Mustang.

While Dyson claimed pole position in qualifying, led every lap of the 29-lap race and clocked the fastest time of the session on his way to his third win of the season, it wasn’t enough to derail Francis Jr.’s (No. 98 Frameless Shower Doors Ford Mustang) drive to a sixth career Trans Am title.

Dyson mathematically had a chance at the championship if Francis Jr. finished last. But with Ernie Francis Jr. taking second, the points from Dyson’s perfect weekend still weren’t enough to keep Francis Jr. from scoring a second consecutive TA championship. 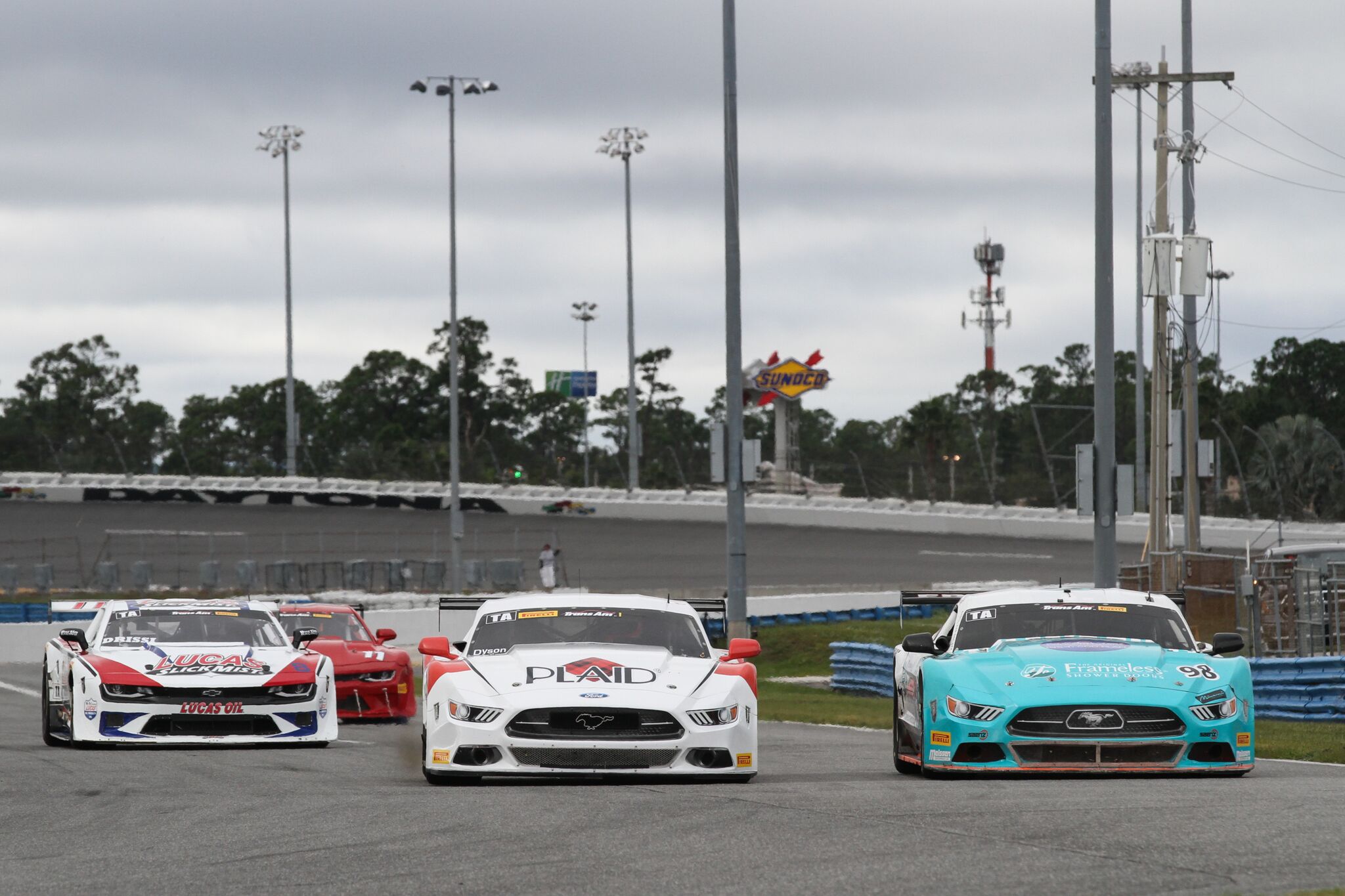 Despite coming up shy of his championship goal.  the second-year TA driver was ecstatic after the race to keep the winning Dyson name alive at the World Center of Racing.

“I won here a few times the first part of my racing career and I am feeling fantastic after that win,” Dyson said. “It’s so great to be back at Daytona winning here, there’s nothing quite like it. It’s been a very dramatic season for us, a lot of ups and downs. We came here and we’ve done exactly what we needed to do. We came up a bit short on the title race but it was a real joy and privilege to race out there today,”

Targeting the lead right from the drop of the green flag, Francis Jr., shadowed Dyson throughout the race. On the final lap, the 21-year-old South Floridian sliced a tire in the No. 98 Frameless Shower Doors that extended Dyson’s margin of victory as Francis Jr. nursed his wounded Ford Mustang to a second-place finish.

“I am really looking forward to next season racing against Chris (Dyson),” said Francis. “Chris and I go to battle every race and I think we’ve made each other better drivers because of it. We had to take it home today to clinch the championship. Wish we could have ended the season with a win, but we will be back next year even stronger.”

Adam Andretti drove from the back of the pack to finish third in the No. 17 Engineered Components Co./AnchorBolt Chevrolet Camaro, prevailing in a spirited battle to end Tomy Drissi’s bid for a fourth-consecutive podium finish in the No. 8 Lucas Oil/Axalta Chevrolet Camaro. The fight for the podium also earned Andretti the Cool Shirt Cool Move of Race.

“I felt like I was on a mission,” said Andretti. “Tomy (Drissi) and I had a blast. I couldn’t have asked for any better competitor out there to go door-to door-with and clean. I can’t thank Tomy enough because that was so fun. I hope it was the highlight of his day because it sure was mine.”

Kerry Hitt, in the No. 19 Advanced Composite Products Inc. Cadillac CTSV, earned the Masters Cup Award in the TA class after finishing his 100th Trans Am career start in 13th place. In addition to his Masters Cup honor, Hitt was given a special commemorative trophy by Trans Am to celebrate his career accomplishment.

“We started this journey 18 years ago,” Hitt said. “Trans Am is my family and this (trophy) is just priceless. I can’t wait to continue this journey with them.” 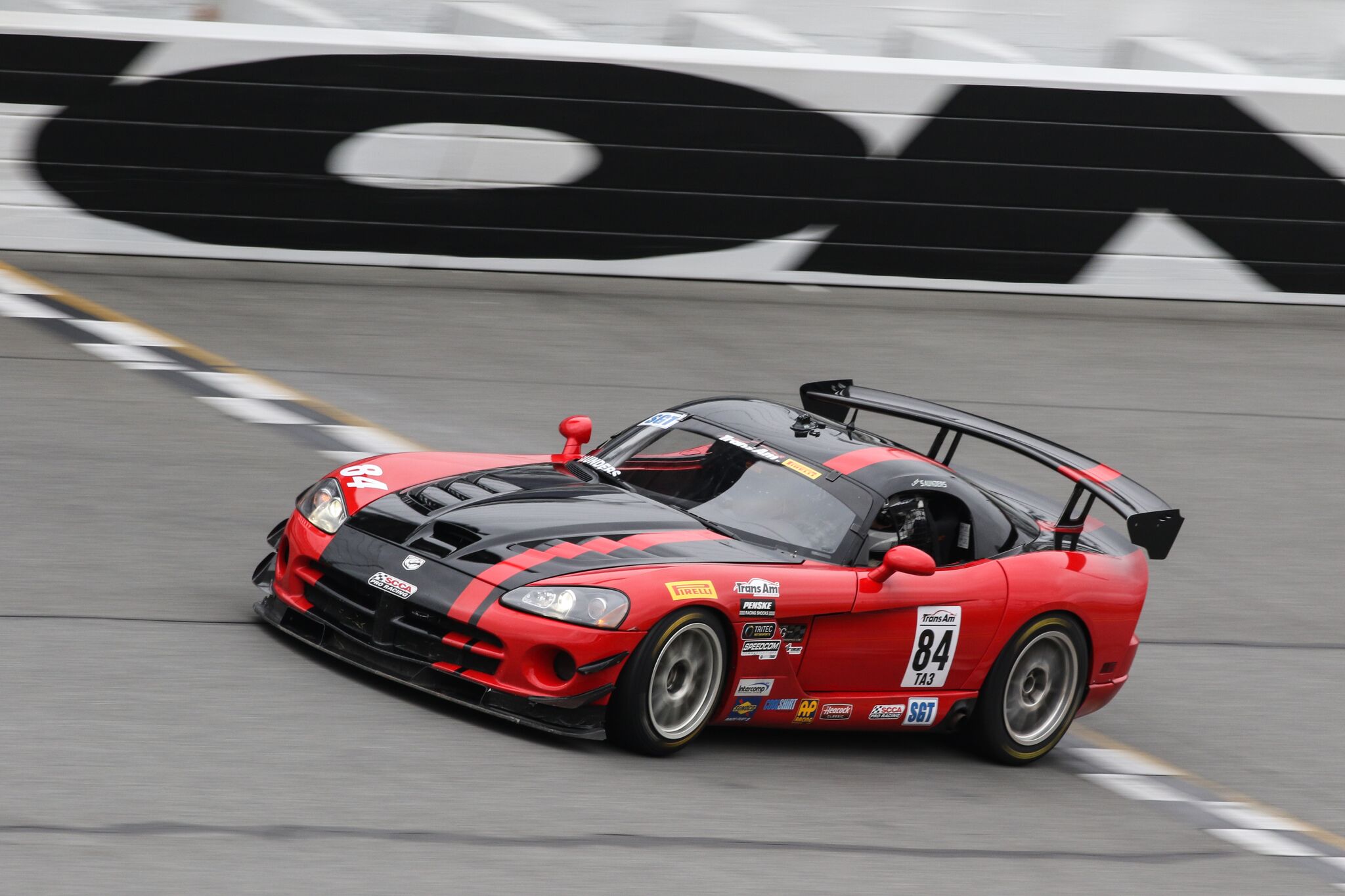 “Wow, it was a heck of a battle,” said Saunders. “The Porsches are so fast, and Mark [Boden] and Tim [Kezman] are such great drivers. We were faster in the banking, and they were much faster in the infield, so it was a balance of where I could get them, where they could get us. We got a little lucky in traffic, and that helped. They got unlucky in traffic, and that sometimes happens. It was a heck of a battle and a great time. We made the pass for the lead going into NASCAR Turn 3, and I was able to hold it. Before that, we actually changed the lead four, five or six times before we were finally able to make it stick. I was able to keep them behind me in the infield, and then pull away a little bit.”

Steven Davison continued his winning streak in the GT class, ending his championship season with his fifth victory in the No. 22 Davinci Plastic Surgery Aston Martin Vantage. 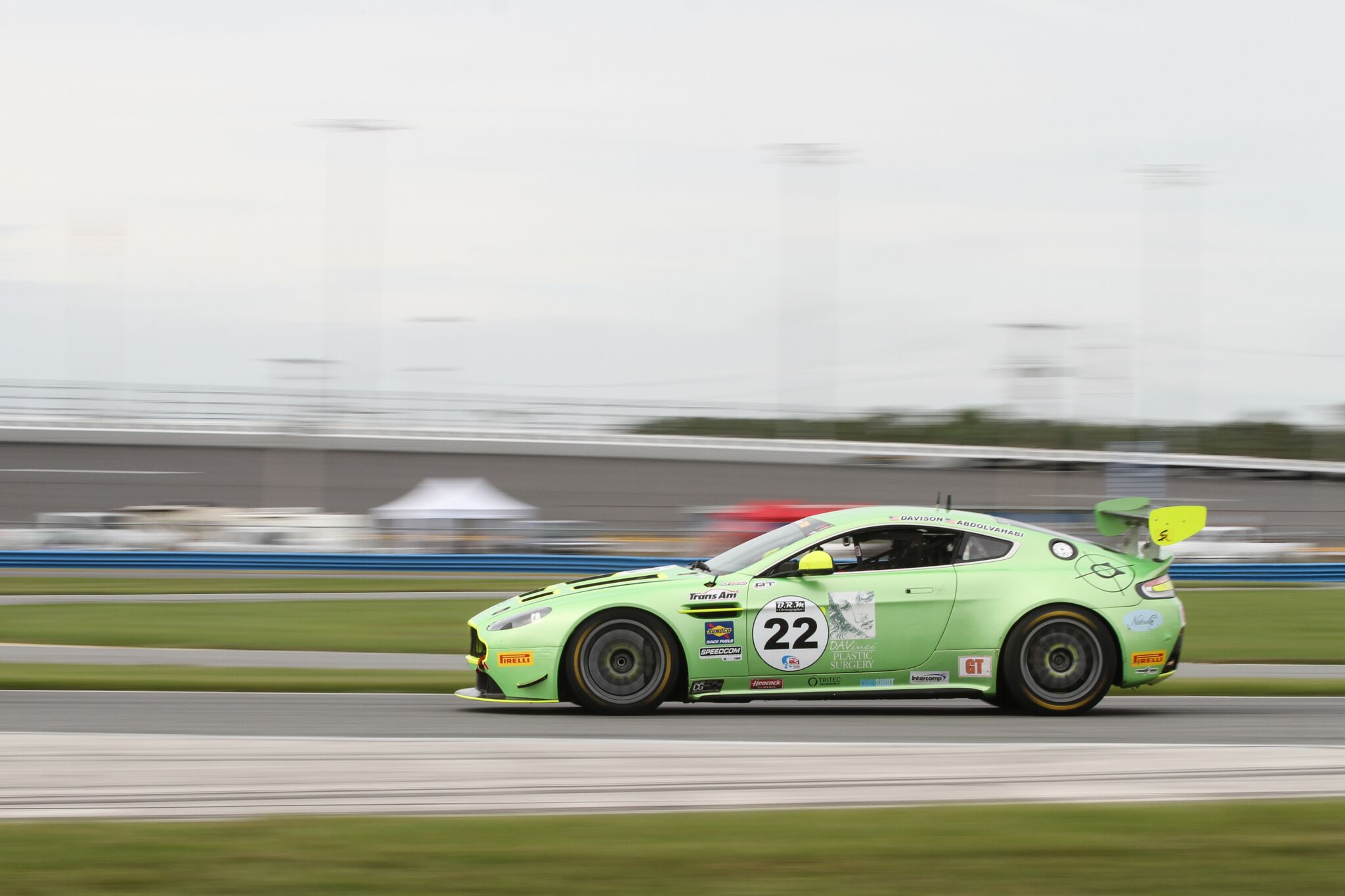 Davison went to the point during a Lap 10 caution when pole-starter Mark Ramsey was issued a drive-through penalty after the first-time Trans Am competitor missed the wave-by in the No. 92 Big Data in Action Mercedes-AMG GT4. The mistake forced Ramsey to a third-place finish. Billy Griffins took second in the No. 14 Griffin Auto Care/Sheehan’s Towing Ford Mustang.

“Winning was fabulous,” said Davison. “It was real nice to see good GT competition out there. From my standpoint, it was a ‘stay out of trouble’ race, and I couldn’t be happier to end the season with a win. The Mercedes (Mark Ramsey) was very strong to start with, and so was the Ford (Billy Griffin). I got behind the Ford, and worried and harassed him a little bit before I got by. I thought it would be a very good head-to-head battle with the Mercedes toward the end, but maybe his tires wore down a little bit. It was great racing. I took the lead after the restart, and then held on the rest of the race.”