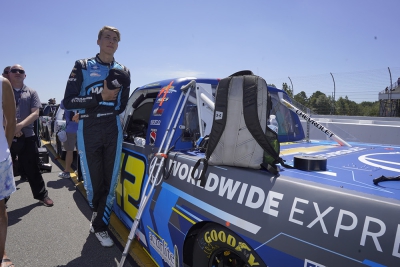 Carson Hocevar will return to Niece Motorsports in 2023, piloting the No. 42 WWEX Racing Chevrolet Silverado for his third full-time season in the NASCAR Craftsman Truck Series (NCTS).

Hocevar, who has made the NCTS playoffs the past two seasons, will race with full-season support from the WWEX Racing program, which comprises Worldwide Express, Unishippers and GlobalTranz.

“Niece Motorsports feels like home, so I’m excited to come back and compete for a Championship in 2023,” said Hocevar. “I’m so thankful to Worldwide Express and their WWEX Racing program for stepping up to sponsor us for the whole season. I’ve enjoyed the partnership and really look forward to growing it next season. Our goal remains to bring Niece Motorsports, Al Niece and WWEX Racing wins and a championship in 2023.

“I’ve dreamed of racing in NASCAR since I was a little kid. To be preparing for my third full-time season in the Truck Series is surreal. Thanks to Al Niece and everyone at Niece Motorsports, Chevrolet, the Worldwide Express family of brands, Premier Security Solutions, GM Parts Now, and Scott’s Coins, Jewelry & Sports for getting me here. Their support means the world.”

After a strong rookie campaign in 2021, Hocevar continued to turn heads in his sophomore season. In 23 races, Hocevar tallied seven top-five and 12 top-10 finishes. In addition, the Michigan native earned two stage wins and led 282 laps. Hocevar put the Series on notice in June, earning the pole at Sonoma Raceway, a mere seven days after sustaining a broken ankle at World Wide Technology Raceway.

Hocevar’s abilities are not relegated to one type of track. The 19-year-old driver found the front of the field on dirt tracks, road courses, intermediate tracks, and short tracks.

“Carson has proven time and time again what a tremendous talent he is, and we are glad that he’ll be back behind the wheel of our Chevrolets again next year. We couldn’t do this without great partners, so we are incredibly thankful to have full season support from Worldwide Express. We look forward to making them proud on and off the track.”

“Carson has quickly become one of the most-recognizable figures in the truck series – not only for his unique fashion choices, but for his on-track performance,” said Mike Grayson, Executive Vice President of the Worldwide Express family of brands.

“Our company is built on the concept that hard work breeds success. It’s why we couldn’t have picked a better partner than Niece Motorsports, who share the same driving philosophy. We’re excited to be back on the 42 this year as Carson and the Niece team set their sights on the Championship.”

The NASCAR Craftsman Truck Series will kick off at Daytona International Speedway with the NextEra Energy 250 on Friday, February 17, 2023 at 7:30 p.m. ET, airing live on FS1, The Motor Racing Network (MRN) and SiriusXM NASCAR Radio.

Rate this item
(0 votes)
Tweet
« Jimmy Villeneuve to Lead No. 4 Team in 2023 Hailie Deegan will be racing in the NASCAR Craftsman Truck Series and Xfinity Series for ThorSport Racing who is partnered with FORD in 2023 »