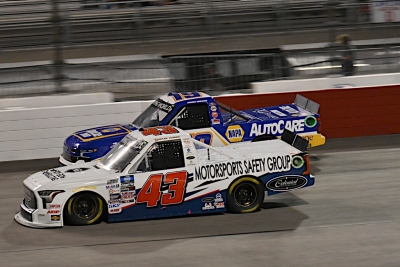 Derek Kraus led the way among a trio of McAnally-Hilgemann Racing drivers competing in the NASCAR Camping World Truck Series race under the lights at Richmond Raceway on Saturday night.

Kraus drove the No. 19 NAPA AutoCare Chevrolet Silverado to a 12th-place finish in the Worldwide Express 250 for Carrier Appreciation.

After starting 18th on the grid, Kraus charged ahead to finish 11th at the end of the first stage of the race. Throughout the remainder of the 250-lap event, he battled for a top-10 spot among playoff drivers – in a race that was slowed by just one caution, other than for the two stage breaks. His 12th-place finish extended his string of consistent runs – with an average finish of 10th in the last six events.

Garcia, who qualified 17th, got shuffled back in the first stage of the race. He battled back, however, and turned in a solid performance for the remainder of the race. His 20th-place finish topped the 28th-place finish he had in his previous series start, at Lucas Oil Indianapolis Raceway Park on July 29.

Howard, who started 24th, battled to move up – but was not able to gain ground in the early going. Despite adjustments by his crew during pit stops, he continued to face handling problems – leading he and his team to suspect an undetermined mechanical issue. Despite the problem, he continued on to finish 28th.

In advance of the race – Kraus, Howard and team co-owner Bill McAnally visited NAPA stores and shops in the Richmond area. On race day, a group of about 30 special guests from the NAPA Richmond District were in attendance at the track for a VIP experience. They were treated to a driver meet-and-greet, a garage tour, a VIP tour of MHR’s NAPA transporter, pre-race grid access, and access to MHR’s pit area on pit road. In addition, four seats on the team’s pit road war wagon were available for VIP guest crew members.

“We were okay today. We just needed more on the long runs. It was a fun race and the pit stops were good. So we improved in that area, but just struggled a little bit with the truck. Overall, it was a fun night at the track.”

“I’m not sure what was wrong tonight. We feel we had a mechanical issue, as no adjustment would change the handling. We will regroup and be strong at Kansas.”

“I learned a lot tonight at Richmond. I appreciate everyone at MHR for helping me improve throughout the race and get faster every run. It was good for us to complete all the laps we did and bring home a decent finish.”