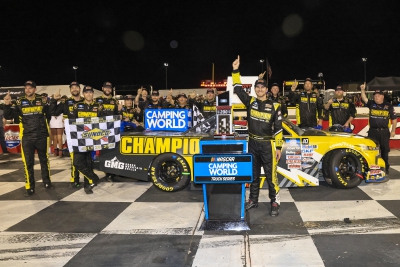 Grant Enfinger (No. 23) celebrating after scoring the win in the TSports 200 at Lucas Oil raceway Park in Indianapolis, Ind. Getty Images

After a day where John Hunter Nemecheck and Ty Majeski led just 146 laps combined at the TSports 200 at Lucas Oil Raceway Park, nobody expected Grant Enfinger to score his first win of the season and book his tickets to the round of 8 in the NASCAR CampingWorld Truck Series playoffs. But that is exactly what happened Friday night.

“We are finally moving forward,” said Enfinger in an interview with Fox Sports after celebrating with his team. “Those were the first laps we led since Atlanta. We have just been off as an organization lately, but can’t say thank you enough for the guys who helped put this together.”

The race itself was a fairly clean one with tons of great racing throughout the night. The Truck Series made its first visit to the track since 2011, on the exact same day 11 years apart. It wasn't until just a few laps remained in the 200 lap event, in which cautions led to more cautions, and controversy struck once again.

Carson Hocevar spun Colby Howard with just eight laps to go in the event, which seemed to be payback after an incident earlier in the day. Howard showed his displeasure on the track when he raised his arms when Hocevar drove by under caution. That wouldn't be the last of the controversy, as on an overtime restart. Nemecheck got into Talyor Gray battling for the win in turn three, and did a dump and run move in turn three. Gray would finish in the 22nd position at the end of the night.

On the final restart, Enfinger took the lead away from Zane Smith, who always finds himself in the top five at the end of races. After a two lap battle, Enfinger stole the win from the other playoff drivers, and secured himself to the round of 8. Three playoff drivers finished outside of the top 10 in the TSport 200, which would be Christian Eckes (finished 16th), Chandler Smith (finished 18th), and Hocevar (finished 21st). Crafton, who complained about an ill handling truck throughout the race, brought it home to a ninth place finish.

The 207 laps completed Friday night took two hours, five minutes, and 56 seconds to complete with an average speed of 106.586 mph. There were 10 cautions with 78 of the 207 laps being run under the yellow flag. On Saturday, August 13th, the tough trucks of NASCAR will take on the action track of Richmond Raceway for a Saturday night shootout. The Worldwide Express 250 for Carrier Appreciation will begin around 8 p.m. Eastern, and will be carried live on FS1, MRN, and SiriusXM NASCAR Radio.