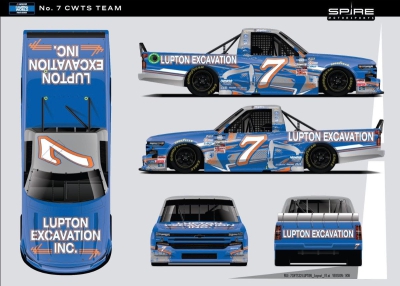 Lupton will carry sponsorship from Lupton Excavation as he makes his first Camping World Truck Series start of 2022.

“I’d like to continue that pace this weekend. I have experience at Mid-Ohio Sports Car Course and with my road course background, plus with the leadership of Bono (Manion, crew chief), I think we can surprise a lot of people on Saturday afternoon.”

Since 2015, Lupton has made multiple starts across NASCAR’s Cup, Xfinity and Camping World Truck Series. The 28-year-old Wilton, Calif., native has logged 14 Truck Series starts across his career, earning one top-five and four top-10 finishes.

“Dylan Lupton has shown a lot of promise over his career so we’re eager to see what he can do this weekend at Mid-Ohio,” commented Spire Motorsports co-owner T.J. Puchyr. “He’s a good, hard-nosed road racer and having the leadership and wealth of knowledge between Mike (Greci) and Bono (Manion) will be important for Dylan. He’s done well at Mid-Ohio in the past, so we think we’ve got a strong combination heading into Saturday.”

The O’Reilly Auto Parts 150 will be televised live on FS1 Saturday, July 9 beginning at 1:30 p.m. Eastern Daylight Time. The 15th of 23 races on the 2022 Camping World Truck Series schedule will be broadcast live on the Motor Racing Network and SiriusXM NASCAR Radio Channel 90.