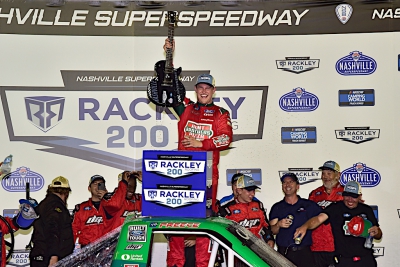 Preece led 74 of the 150 laps, scoring his second straight win at Nashville Superspeedway.

Friday night’s truck series race had a total of eight cautions for 43 laps. Among the drivers eliminated due to an accident were Corey Heim, Grant Enfinger and Matt DiBenedetto.

Rounding out the top five were Zane Smith in second, Carson Hocevar in third, Ty Majeski in fourth and Stewart Friesen in fifth.

Rounding out the top ten were Christian Eckes in sixth, Tyler Ankrum in seventh, Matt Gutierrez in eighth, John Hunter Nemechek in ninth and Matt Crafton in tenth.