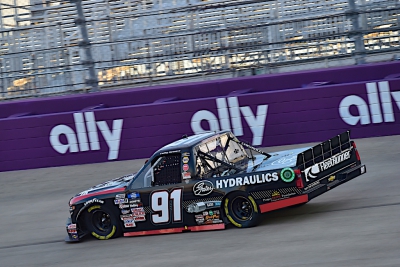 Kraus had his No. 19 Hunter Nation Chevrolet Silverado in the top 10 through most of the race, scoring important stage points along the way; then battled back after making a late-race pit stop to finish 11th.

Howard started the race back in the pack and had to contend with heavy traffic and handling issues, while working his way forward to finish 16th in his No. 91 Gates Hydraulics Chevrolet Silverado.

Kraus was fifth in practice earlier in the day and qualified fifth in time trials. He picked up bonus points, finishing seventh in Stage 1 and sixth in Stage 2. His team opted to have him stay on track during a subsequent caution, then chose to pit for fresh tires during a late caution. A restart, followed by an immediate caution, left Kraus just 10 green-flag laps to make up ground. He charged from 21st to 11th at the checkered flag.

Howard was also fast earlier in the day, posting the sixth quickest time in practice. A slip on his qualifying lap, however, left him to start the race in 32nd. His team worked through much of the race to resolve a loose condition. They got his Chevy dialed in and he got as high as 11th late in the race, but contact from another truck created a similar handling issue and he got shuffled back to 16th in the final laps.

Kraus, 11th in the championship standings, was able to close the gap and is just 29 points below the cutoff line for the playoffs – with two regular season races remaining. Howard, who is in his first full season of competing in the Camping World Truck Series, is 18th in the standings.

MHR welcomed two special groups at Nashville. Guests from Hunter Nation were in attendance, along with a group from Gates Corporation – which was led by Mike Gordon, Business Development Manager at Gates Corporation. Guests received a VIP Experience – with the opportunity to be with the MHR drivers and teams on the starting grid and get their photos taken next to the No. 19 and No. 91 Chevy Silverados. They had special access for driver introductions and had the chance to tour an MHR transporter.

The weekend was special for Gordon and his wife, Paula, who were celebrating their 45th wedding anniversary.

“We needed to pit when everyone else did. But we collected stage points and came out of here clean. We will head to Mid-Ohio with our heads high. It was cool to have Hunter Nation on our Chevy Silverado.”

“We struggled the entire race with a loose truck. The second to last caution, we finally got it to a drivable state. But damage from another truck got us back to being extremely loose again. We fought hard all day. We will regroup and be better.”