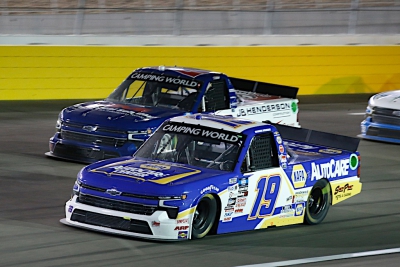 Derek Kraus returns to Nashville Superspeedway this week with some unfinished business. The McAnally-Hilgemann Racing driver was in contention for the win last year, before getting caught up in an incident in the final segment of the race.

Kraus, who wheels MHR’s No. 19 Hunter Nation Chevrolet Silverado RST, aims to pick up where he left off as the NASCAR Camping World Truck Series returns to the 1.333-mile oval in Lebanon, Tennessee on Friday night for the Rackley Roofing 200.

His MHR teammate, Colby Howard in the No. 91 Gates Hydraulics Chevrolet Silverado RST, is also looking for a strong run – as he makes his first series start at the Nashville track.

Kraus had one of his best performances of 2021 at Nashville. He won his first career series pole award in qualifying and led the first 48 laps, as he finished first in Stage 1. He finished third in Stage 2 and was in position to battle for the win, but was knocked out of contention in the final segment of the race – after an incident on Lap 111.

Both MHR drivers roll into Nashville with momentum. Kraus is coming off his best finish of the season at Knoxville Raceway, where he picked up his first pole of 2022. His sixth-place finish, along with the prestigious stage points he gained, moved him up two positions to 11th in the championship standings – just 27 points below the cutoff line for the playoffs. Howard had a solid race at Knoxville and also gained two spots in the standings, moving up to 17th.

Friday’s event is the second of three races that comprise this season’s Triple Truck Challenge in the Camping World Truck Series – with $50,000 in bonus money up for grabs to the winning driver.

A special group of guests from Hunter Nation will be in attendance at the race on Friday.

“We could not be more excited to join forces once again with Derek and MHR to help bring more awareness to sportsmen’s issues ahead of this weekend’s race,” said Luke Hilgemann, CEO of Hunter Nation. “God, family, country, hunting, and the outdoor lifestyle are the primary focus of our organization and we can’t think of a sports base that identifies more closely with those virtues than NASCAR fans.”

A group of guests from Gates Corporation will also be welcomed to the Nashville event. Heading that group will be Mike Gordon, Business Development Manager at Gates Corporation. He and his wife, Paula, will be celebrating their 45th wedding anniversary.

MHR will provide their guests a VIP Experience. They will have the opportunity to be with the MHR drivers and teams on the starting grid and get their photos taken next to the No. 19 and No. 91 Chevy Silverados. They will be up front for driver introductions, as well as getting a tour of the MHR transporter and a special meet-and-greet.

The Nashville race wraps up eight consecutive weeks of competition for the series. The circuit will be idle next week, before returning to action at the Mid-Ohio Sports Car Course on July 9.

The format for practice and qualifying at Nashville will involve a 20-minute warm-up/practice session – followed by qualifying.

“I expect we will be able to keep our momentum rolling into Nashville. We brought a fast truck last year and was able to get a stage win and the pole. So, I’m really looking forward to the race and we just need to stay clean and run inside the top 10.”

“I’m looking forward to Nashville. MHR has had success there. So, hopefully we can get a good run in and build some momentum up.”