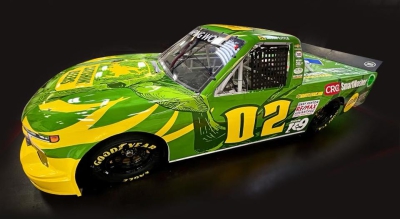 We are excited to announce that several Middle Tennessee business owners have come together to support racing in the Nashville community by sponsoring Jesse Little and his Young’s Motorsports Chevrolet for the upcoming NASCAR Camping World Truck race at Nashville Superspeedway. The goal of the sponsorship is to help create awareness and support the efforts being made to bring the sport back to Music City for years to come, while also raising funds for one of its most important organizations, Motor Racing Outreach. Check out all the details at NASHVILLERACE.COM

Racing has always been about family and building relationships. We don’t know if it was by chance or fate, but this whole idea started around a campfire in February at Daytona. This is where Travis Wright, partner at CS&A Insurance based in Nashville, TN, and owners of Young’s Motorsports, Randy and Tyler Young found themselves as neighbors in the infield. After coming off a 6th place finish, Jesse and the rest of the race team were celebrating their strong showing by hanging out in the motor coach neighborhood with Travis, Tyler, and Randy.

As the evening turned to night, the group found themselves talking about Nashville and all the excitement about NASCAR being back for 2 years in a row. On a whim, Travis posed the idea of collaborating with local Nashville businesses to sponsor Jesse for the race at the Nashville Superspeedway. “How neat would it be if we can bring folks together and create more awareness for the sport in the Nashville community?”, Travis said. Randy, Tyler, and Jesse all looked at each other and said, “Well then, let’s make it happen!” and the rest is history!

The other sponsorship component was how can we also “give back” through this partnership? Travis has worked locally in Nashville with Motor Racing Outreach for several years and the Waltrip Brothers Charity Championship (WBCC). This is the annual golf tournament and concert hosted by Darrell and Michael Waltrip to raise funds for MRO every year. MRO has been an instrumental organization for drivers, crews, and their families for close to three decades. Jesse grew up as one of the MRO kids as he spent most of his childhood at the racetrack when his dad, Chad Little, raced in the 90s. The plan would be to donate any funds raised over what is needed for the sponsorship to MRO. We are thrilled to announce that over $20K has been donated to MRO because of this sponsorship

Jesse will be honoring his dad Chad Little with a throwback paint scheme and retro driver suit that resembles the suit Chad wore in the 90s. The primary sponsor is Nashville-based business Catchin’ Deers. Business owner and former Nashville Predator Mike Fisher is excited about this partnership. “We are really looking forward to the race and the opportunity to partner with such a great group of people”. The other local business sponsors include CS&A Insurance, Nashville K-9, Pella Windows & Doors of Nashville, Gary Ashton RE/MAX Advantage, Granite Garage Floors, Southern Shine, Southern Events, Puckett’s Restaurant, Outdoor LED Rentals, Velocity Motorcars, and Cool Hand Speedco.