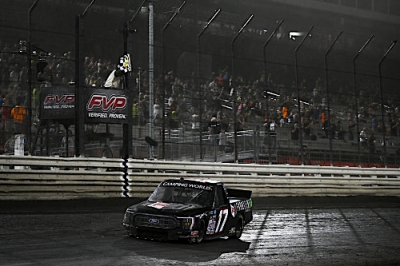 Even in the lone off weekend the NASCAR Cup Series gets this year, Todd Gilliland couldn’t stay away from a race car (or in this case race truck). To top it off, he got the job done at Knoxville Raceway Saturday night while driving for his father’s David Gilliland Racing in the No. 17 Ford F-150 on the half mile short track. And of all weekends he won for DGR, he won on Fathers Day weekend.”

“This is just so fun,” said Todd in the post race press conference 20 minutes after winning at Knoxville. “I love Truck racing, I love dirt racing, and I love DGR. I’m super proud of everyone at DGR.” David Gilliland explained to the media members that this deal for Todd to drive the truck wasn’t completed until last Monday. It’s his one off weekend of the year, and he wants to do nothing but race. It was a special win from the owner's side since it was Father’s Day weekend and to win with Todd. The track was great tonight, better than last year since we had all of the track prep, and it was great all around.”

Todd explained why he would want to drive in the NASCAR Truck Series race on his lone off weekend of the year. “When you grow up in a racing family, I feel like racing is really just a hobby. Whether it turns into a professional career or not, I just love racing, and it feels like a hobby to me. The Cup Series is definitely really stressful, so to come out here and to be relaxed, have fun, and win is great.”

Like the elder Gilliland referred to, the racing tonight was a major upgrade than the green white checkered wreck fest that occurred last July. The Trucks were able to create a cushion on the flat dirt surface in Southern Iowa, which may be new to NASCAR but not for long time dirt fans. The cushion of dirt was able to produce side by side action, rather than the one lane grove like the inaugural race last year. Ben Rhodes in the pits Saturday afternoon said that he was afraid of the track laying down rubber like the inaugural event last summer, but that certainly wasn’t the case.

Grant Enfinger also mentioned the fear of the track laying down too much water on the track. He was afraid if that was done, you would see the nose opening be pancaked full of mud and would result in blown engines or overheating. The Clean Harbors 150 only saw one overheating issue with Rhodes back early in stage one, but was quickly resolved and had o further issues throughout the night.

While Todd said that the Saturday night for the trucks was fun, others wished it didn’t end the way it did. Driver of the No. 42 Carson Hocevar was dominant all race long in the beginning portions, until a blown engine ruined his night to just a 35th place finish. 2022 Gateway Dirt Nationals champion Tyler Carpenter, who won his way to a one off start in the No. 41 for Niece Motorsports, had an issue early in the race that landed him his first last place finishes in the top three national series of NASCAR.

All in all, the 2022 running of the Clean Harbors 150 at Knoxville Raceway took two hours, 12 minutes, and seven seconds to complete, with an average speed of 34.061 mph. The race had nine cautions for 45 laps under the lights and had six lead changes with a margin of victory of 0.945 seconds over John Hunter Nemecheck in the No. 4 Kyle Busch Motorsports Toyota Tundra.