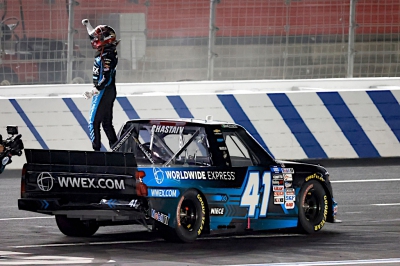 Chastain took the race lead on the last lap of the second overtime attempt and would go on to win.

Rounding out the top five were Grant Enfinger in second, John Hunter Nemecheck in third, Christian Eckes in fourth and Zane Smith in fifth.

Carson However was leading the race up until a caution would send the race into overtime. After the restart, Hocevar lost control of his truck and spun out while battling Ryan Preece for the win. Preece would hit the wall and would go onto finish 11th.

Preece was noticeably unhappy with However post-race.

“All of you kids watching right now wanting to get to this level, don’t do that. Race with respect,” Preece told FS1 post-race.

Rounding out the top ten were Tanner Gray in sixth, Kyle Busch in seventh, Chandler Smith in eighth, Stewart Friesen in ninth and Ben Rhodes in tenth.