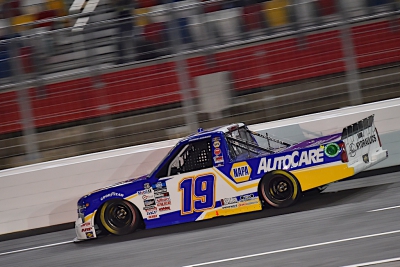 Derek Kraus and Colby Howard each waged a tough battle to come away with a pair of solid finishes for McAnally-Hilgemann Racing in the NASCAR Camping World Truck Series North Carolina Education Lottery 200 at Charlotte Motor Speedway on Friday night.

Both drivers indicated they had fast Chevy Silverados, but battled for track position throughout the event. They were fast in practice earlier in the day, with Kraus fifth and Howard 10th.

Kraus started 16th on the grid and finished the first stage of the race in that position, while Howard started 20th and finishing the stage in 17th. Their teams took different strategies when a caution came at near the end of the second stage. When all the leaders headed down pit lane, Kraus remained out and took over the lead. Howard pitted with the pack and restarted in 20th. Following a subsequent caution, Kraus was able to pick up a bonus point for finishing 10th in the stage, with Howard 19th.

After his pit stop, Kraus was 26th when the race restarted with 69 laps remaining and quickly began making up ground on the competition. He caught up to Howard, who was running 17th, and charged ahead – nearly breaking into the top 10 when green-flag pit stops began.

Kraus was 13th and Howard 16th, as the field cycled through the stops. Kraus charged to 10th just before a late race caution led to the first overtime. That attempt led to another caution, with Howard moving up to 10th at that point. A shuffle of positions following that final restart left Kraus to finish 12th and Howard in 14th.

MHR hosted guests from the NAPA Charlotte Group at the speedway on Friday – providing them with a special VIP experience. The guests were able to be on the starting grid with the MHR drivers and teams and had the opportunity to take pictures with them and stand next to the No. 19 and No. 91 Chevy Silverados. They also went behind the scenes for driver introductions. In addition, they had a tour of the NAPA transporter and had a meet-and-greet with the drivers. VIP guest crewmembers also served as part of the team, with seats on the MHR pit boxes.

Earlier in the week, Robert Goldenstein, the district manager of the NAPA Charlotte Group, brought employees and customers from the Dickson NAPA Group to the MHR shop for a special tour. Kraus and Howard also made appearances at select NAPA AUTO PARTS stores in the greater Charlotte area.

“The handling was a struggle all night. We worked on it and got it a little better throughout the night and ended up 12th. Our NAPA team did great on pit road and gave us a great stop. Overall, not a bad night, but we will have to come back stronger to Gateway next weekend.”

“We had a very fast Gates Hydraulics Silverado tonight. We just couldn’t pass well and track position was never in our favor. If the first green-white-checkered would have gone through, I think we would have had a much better finish. We’ll be ready for Gateway.”