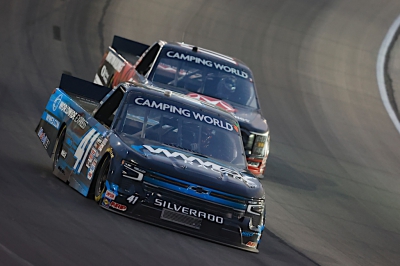 Chastain wheeled the No. 41 Worldwide Express Chevrolet into the top-10 by lap six before settling for a 13th-place finish in Stage One. Following a four tire stop at the stage break, Chastain made his way back into the top-10 to pick up a ninth-place result in Stage Two.

After gaining three spots on pit road prior to the start of the final stage, Chastain restarted fifth and made his way up to third before the caution came out at lap 105. The No. 41 team opted to come down pit road for fuel only and battled with teammate Carson Hocevar for the lead on the ensuing restart. Chastain fell back to 15th on the second-to-last restart following a caution on lap 127 but managed to come away with a 12th-place result Friday night.

Chastain on his night in Texas: “We had a really fast Worldwide Express Chevrolet Silverado capable of running in the top-five tonight. Our No. 41 team felt like we had a chance at competing for the win late, but unfortunately those late-race restarts didn’t fall in our favor. It was great to represent Worldwide Express tonight in their home race and help them celebrate their 30th anniversary and I’m looking forward to racing with them again on Sunday.”