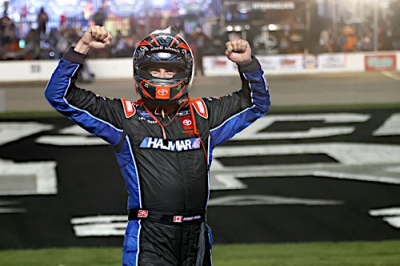 Stewart Friesen and Christian Eckes battled for the lead in a thrilling NASCAR overtime finish at Texas Motor Speedway Friday night. The battle ended ultimately with Friesen scoring his third career victory, leading seven times for a total of 60 laps.

“I’m terrible at restarts and that was probably the best one on old tires,” said Friesen on the NASCAR overtime restart. “Didn’t spin the tires then got a jump then threw a slider in one and two and it stuck.”

Despite leading the most laps, Friesen didn’t have a mistake-free night. At the beginning of his victory interview with FS1, the driver from Canada noted he made mistakes in the first two stages of the race.

“I made all the mistakes I needed to make in the first two segments of the race,” continued Friesen.

The driver of the No. 52 machine holds two top-five and four top 10s this season.

Finishing 0.122 seconds behind the winner, Eckes takes home his fourth top-five and fifth top 10 finish of the year at Texas. The No. 98  ThorSport Racing Toyota led the field for 40 of the 149 laps.

Preece, making just his fifth Camping World Truck Series start of the year this weekend, turned a fifth-place start into a third-place finish. Preece claimed both stages of the SpeedyCash.com 220 and led 27 laps.

Preece, after the race on FS1, said they just need to clean a few things up.

“We just need to clean up a few things. When you get in control of the race you just can’t give it up here,” said Preece. “It was really top lane dominate there, basically, there in the middle of the race to the end.”

Carson Hocevar and Ty Majeski rounded out the top five.

Seven cautions slowed the 220.5-mile event at the 1.5-mile oval. Two of those were for scheduled stage breaks while five were for on-track incidents. One of those involved a single-truck incident in turn two while the remaining four were for a pair of trucks each. The two most notable incidents involved Derek Kraus and Ty Majeski on lap 87 while the other most notable incident involved Tanner Gray and Ben Rhodes on lap 143, sending the race into NASCAR Overtime. 33 of the 36 trucks in the field finished the race.

The next race for the Camping World Truck Series will be at Charlotte Motor Speedway on May 27. Coverage of the NC Education Lottery 200 will air live on FS1 and MRN Radio at 8:30 p.m. ET.