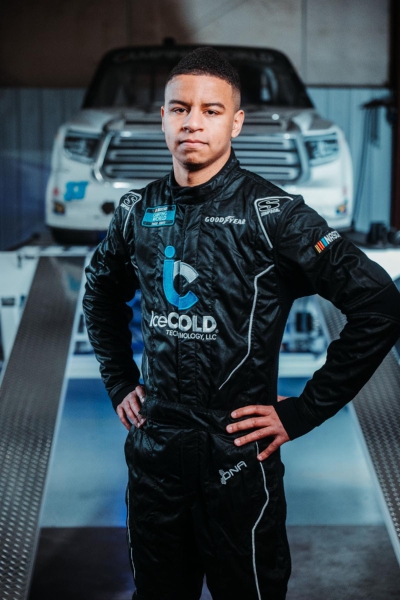 Williams, a native of Detroit, Michigan impressed in his series debut at World Wide Technology Raceway at Gateway last August finishing a respectable 21st and earning his speedway license in NASCAR competition.

“I’m incredibly grateful for this next chapter in my NASCAR career by making my Truck Series debut at Texas Motor Speedway this weekend,” said Williams. “We have been diligently working hard on sponsorship to run as many Truck Series races as we can this season and I’m thrilled to have a few races locked down with some terrific partners.”

To kick off his limited NASCAR Camping World Truck Series schedule in 2022 in the Lone Star state, Williams will be joined by co-partners The Doug Flutie Foundation for Autism Inc and IceCOLD Technology.

Former NFL Quarterback, Doug Flutie, and his wife Laurie started The Doug Flutie Foundation for Autism Inc. in 1998 after their son, Dougie, was diagnosed with autism at the age of three. Their personal experience of raising a son on the autism spectrum inspired them to help others on an equally long and challenging journey.

Over its 24-year history, the Flutie Foundation has distributed over $15 million to schools and organizations who provide clinical therapies, respite services, recreational programs, social skills training, job support and more for people affected by autism.

“We are pleased to partner with Armani Williams to support his career goals and passions through the Flutie Fellow ambassadorship program as he competes professionally in the NASCAR Camping World Truck Series,” said Doug Flutie, Co-Founder of the Doug Flutie Jr. Foundation for Autism.

“We are ecstatic to support Armani’s budding career dreams while partnering with him as he advocates for inclusive opportunities for his peers with autism.”

Alongside The Doug Flutie Foundation for Autism Inc. will be IceCOLD Technology.

IceCOLD Technology LLC. is the manufacturer of the IceCOLD® synthetic catalyst, an environmentally friendly green energy efficiency product for all types of HVAC and refrigeration in residential, commercial and industrial applications.

"IceCOLD Technology is excited and proud to support and sponsor Armani Williams as a NASCAR driver,” offered IceCOLD Technology president Don Bryan. “Armani's strong values, positive attitude, and confident determination are what make him an inspiration and a true champion.

“Nothing can stop Armani from being successful in life or on the track and we are honored to partner with him and watch him prove it."

The continued partnership with Reaume and the placement of the new partners were orchestrated by fgrACCEL, a full-service sports marketing and management agency.

Additional races for Williams with Reaume Brothers Racing are expected this season.

“There are a lot of people that have worked tirelessly in order for me to continue my dream and I’m so thankful,” sounded Williams. “Right now, I have three opportunities with instrumental marketing partners who want to see me succeed on the race track while assisting them in building their respective brands.

“I am spending every waking moment making sure I am prepared to do my part behind the wheel. Whether that is iRacing, studying pictures, reviewing film or just talking to others in the industry. It’s my job to go out there and give my team and partners a finish they would be proud of and that’s exactly what I plan to do.”

From Texas Motor Speedway, Williams will trek to the Pocono Mountains and tackle the 2.5-mile triangle of Pocono (Pa.) Raceway in the CRC Brakleen 150 on July 23.