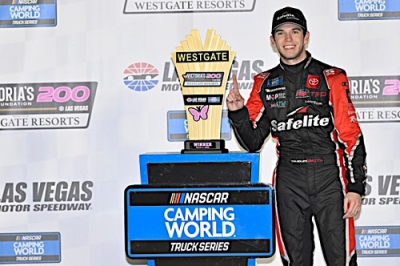 It was a wild night for the NASCAR Camping World Truck Series at Las Vegas Motor Speedway – an event that had 11 cautions and 21 leaders upfront. Through it all, Chandler Smith scored his third career victory.

“All up there. When you guys tuned into me halfway through the race and asked how you got up there, the Good Lord. He performs miracles all day and he’s given me this talent and this opportunity to drive this truck for Kyle Busch Motorsports and for Safelite,” said Smith.

Chandler Smith leaves the 1.5-mile Nevada track leading the series points by six over Zane Smith. The race winner applied something he learned from boss man Kyle Busch on the penultimate restart for the final restart with three circuits remaining.

“Boss man did to me the restart before so I was like, ‘Alright Kyle, I see how it’s going to be, we’re not going to help each other.’ So I kept that in the back of my head,” Chandler added.  We were in contention there at the very end and I stuck it three-wide and was able to clear Kyle (Busch) and get around Zane (Smith). It was all being in the right places at the right times.”

Las Vegas native and Cup Series veteran Kyle Busch came across the stripe in third. Busch came into the race on Friday as the driver to watch as he sought his 62nd career truck series victory.

Stewart Friesen and Ryan Preece rounded out the top five.

NASCAR deemed Preece as the leader as the field circled under the caution flag with six laps to go. However, because Preece did not maintain caution car speed and was passed by several trucks, Preece was then scored to restart fifth with Kyle Busch as the leader.

Veteran driver Todd Bodine traded the broadcast booth for the driver seat in Las Vegas. Bodine, with 795 career combined starts across all three national series, signed a deal to make starts across the 2022 season with Halmar Friesen Racing and Camping World hoping to make that number 800.

Bodine, finishing the night 22nd, started his NASCAR racing career at 22-years-old in the NASCAR XFINITY Series in 1986.

The series moves onto Atlanta Motor Speedway for the Fr8 Auctions 200. Coverage of the event will take place on FS1 and MRN Radio at 2:30 p.m. ET.