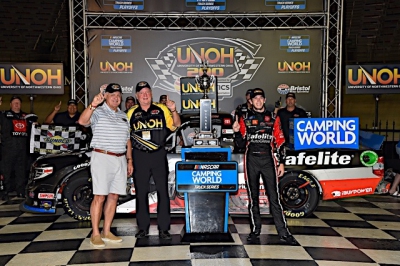 Non-Playoff driver Grant Enfinger, starting the day sixth on the grid, took home the runner-up spot. Enfinger leaves the Tennessee oval with his sixth top-five and 10th top 10 finish in 2021.

John Hunter Nemechek showed strength all night long inside the top five. Nemechek, after starting the day second on the grid, took home his 11th top five of the year. The driver from North Carolina earned his 63rd career top 10.

Chandler Smith, starting seventh on the grid, picked up his fourth top five and seventh top 10 of the year.

Sheldon Creed claimed both stages of the event on Thursday but not the checkered flag, respectively. Creed, leading 189 of the 200 circuits, experienced a problem with around three circuits to go that resulted in a 19th-place finish and two laps down. Despite the issue, Creed will advance into the next round of the Camping World Truck Series Playoffs.

The UNOH 200 featured 11 cautions and two yellow flags as chaos ran all night long. On lap 71, caution flew on the backstretch in a wreck that involved 10 drivers. This impacted notable drivers Drew Dollar, Lawless Alan, Cory Roper and Colby Howard. All drivers involved continued or were evaluated and released from the care center.

Tanner Gray, Parker Kligerman, Zane Smith and Chase Purdy were among others involved in the 11 yellow flags.

The next race for the series will be at Las Vegas Motor Speedway on September 24.