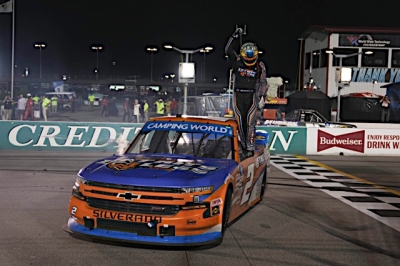 The NASCAR Camping World Truck Series event at Worldwide Technology Raceway didn’t disappoint for those watching on television and at the event. The race featured a 48-minute and 38-second red flag period because of a power outage, a hood flying up on the track under green, an overtime finish, and chaos action all over the track. After all this, the Toyota 200 ended 2-hrs, 15-min, and 56-seconds later.

Sheldon Creed led the charge for most of the night in his No. 2 LiftKits4less.com Chevrolet at Gateway, winning both stages and leading 142 of the 163 circuits. The reigning truck series champion starts the NCWTS Playoffs right where he left off last season after winning his first national series championship.

“My guys put together such a good truck" said Creed.. “We’ve been working hard all year and obviously haven’t had the speed at times and I’ve made mistakes at times. But we were able to build this brand new truck and I feel like we’ve taken everything we’ve learned this year and applied it. They gave me a hot rod today and I couldn’t be happier.”

The California native leaves the track in west Illinois with six top five and seven top 10 finishes along with his victory on Friday.

Two-time truck series champion Matt Crafton took home the runner-up spot. The driver started the night 10th on the leaderboard and sat seventh in stage one and third at the end of stage two.

“They know we’re here. We drove from 10th to get second,” said Crafton after the race. “Just needed a little bit more to catch that No. 2. The two was really good, but all in all, I can’t thank these guys for working as hard as they had worked lately.”

The driver from California leaves with two top fives and seven top 10 finishes so far in 2021.

Sauter scored his first top five finish since May 7th at Darlington Raceway on Friday at Worldwide Technology Raceway.

28 of the 38 starters finished the race when the night ended.

Chandler Smith had issues early when his No. 18 Toyota dropped possible fluid on the track and had to pit. After spending time behind the wall, Smith returned and finished 40 laps down in 28th.

Playoff drivers Todd Gilliland and Zane Smith weren’t so lucky as they did not finish the 163-lap overtime event. Gilliland, piloting the No. 38 Ford was involved in a 10-truck pileup on the frontstretch while the No. 21 team of Smith had a transmission issue end their night.

The next race for the Camping World Truck Series will be at Darlington Raceway on September 5th.