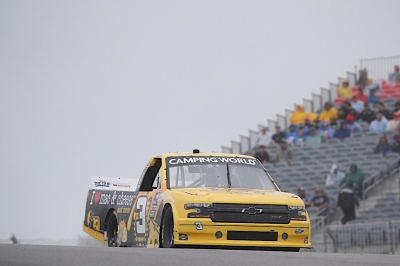 – Starting Position; Bobby Reuse will start the United Rentals 176 at The Glen from the 35th position when the NASCAR Camping World Truck Series (NCWTS) take to the track on Saturday afternoon after a near month long break. Due to no practice or qualifying the starting lineup would be calculated by the competition-based performance metrics system; fastest lap in the previous race 15 percent, driver finish from previous race 25 percent, owner points 25 percent, and driver points 35 percent.

– Watkins Glen International Stats; Saturday afternoon’s United Rentals 176 at The Glen will mark the first NCWTS event Reuse has competed in at the Watkins Glen International, and his second NCWTS start of the 2021 season. Driving the No. 3 for Jordan Anderson Racing in the Brakebest Brake Pads 159 Presented by O’Reilly at Daytona International Speedway Road Course during the second event of the 2021 season, Reuse would start the I Heart Mac & Cheese Chevrolet from the 13thspot and come home with a 27th place finish. Reuse has previously competed at Watkins Glen in NASCAR Xfinity Series (NXS) action in 2015 where he would start 39th and finish in the 32nd position.

– Chassis; JAR will bring chassis No. 010 for Reuse to compete with in Saturday afternoon’s United Rentals 176 at The Glen. Having last competed for JAR at the Circuit of the Americas in May with brother Roger Reuse driving Chassis No. 010 earned a 34th place finish. Bobby previously drove Chassis No. 010 at the Daytona International Speedway Road Course in February earning a 27th place finish.