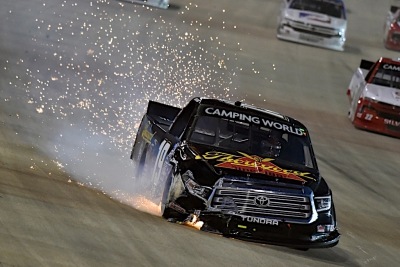 His McAnally-Hilgemann Racing No. 19 Thorogood Toyota Tundra was knocked out of contention after slamming the wall following contact with another truck on Lap 111.

Kraus had won his first career series pole award in qualifying earlier in the day, with a lap of 160.493 mph being quickest of the 42 entries. He led the field to the green flag and set the pace for the first 48 laps, to win Stage 1, his first of the season. Although he lost a few spots during pit stops, Kraus battled back to finish Stage 2 in third – giving him a total of 18 stage points.

With many of the leaders opting to pit off sequence prior to the end of Stage 2, Kraus got shuffled back in the field to start the final segment of the race. He was working his way forward when contact from another truck turned him into the wall along the back stretch wall. The subsequent hit into the Turn 3 wall ended his night, leaving him with a 35th-place finish.

The Nashville event marked the first race to feature Thorogood as the primary sponsor on the MHR No. 19 Toyota Tundra. It also marked the return of NASCAR to Nashville Superspeedway, which hosted Craftsman Truck Series races from 2001 to 2011.

“We had a fast Tundra. It was cool to get the pole, lead laps and win a stage.”

Talk about your qualifying lap.

“We had a really good truck in practice. It rotated the center really well and then in qualifying I was able to stay on the gas a lot and make sure this Thorogood Toyota Tundra was really fast and ended up on the pole.”