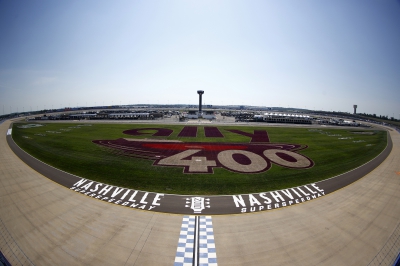 For the first time since 2011, the NASCAR Camping World Truck Series finally made its return to Nashville Superspeedway. At the end of the much anticipated event, it was ultimately Ryan Preece that struck the right chord and scored the victory in Music City. In doing this, Preece became the fifth driver to win in his debut start in the Truck Series.

“This is why I love to race. I love winning. There is no better place than victory lane,” Preece said of his win.

Unlike many races this season, there was both practice and qualifying to help the drivers prepare for the Rackley Roofing 200. From this qualifying session, Derek Kraus scored the pole with a lap time of 160.493 mph; this marked Kraus’ first career Truck Series pole. Meanwhile, Jack Wood’s lap time of 158.959 mph allowed him to start alongside Kraus on the front row. From his starting spot, Kraus was able to maintain his lead and claim the stage one win on lap 45, after leading all 45 laps.

Following stage one, Chandler Smith came off pit road the quickest, which allowed him to take hold of the lead. Chandler Smith’s lead was brought to a halt as the first incident-related yellow flag flew on lap 77. As William Byron’s engine expired, his racecar dripped fluid on the track, which was the root cause of the yellow flag. This caution gave drivers an opportunity to come to pit road. Chandler Smith maintained his lead off pit road. Meanwhile, pit road was troublesome for Josh Berry and Todd Gilliland, who both faced penalties.

On lap 95, Chandler Smith merely held off Zane Smith to capture the stage two victory, along with the ten championship points associated with it.

At the end of stage two, Grant Enfinger and Stewart Friesen opted to stay out in order to gain track position. After less than a lap back under green, a caution appeared on lap 103 for a spin from Johnny Sauter. Sauter received slight contact from Tanner Gray, which helped contribute to his spin.

Under green, Enfinger managed to clear Friesen off the restart. Enfinger held the lead for just a few laps before lap 110 saw yet another caution. The caution appeared for Derek Kraus’ hard hit into the wall due to both a tire issue and slight contact from Josh Berry.

Though Ryan Preece led briefly following the caution, Grant Enfinger got around Preece to take back his lead. With seven laps to go, Preece battled back and passed Enfinger for the number one position. Shortly after, Todd Gilliland also made his way past Enfinger to take hold of the runner-up spot.

At the close of the 200-mile race, Ryan Preece scored the win by a margin of 0.940 seconds over runner-up Todd Gilliland. Grant Enfinger, Zane Smith, and Stewart Friesen made up the remainder of the top-five.

The Truck Series will be back in action next Saturday (June 26) to take on the ‘Tricky Triangle.’ Make sure to tune into FS1 at 12 PM ET to catch all of the action from Pocono Raceway.