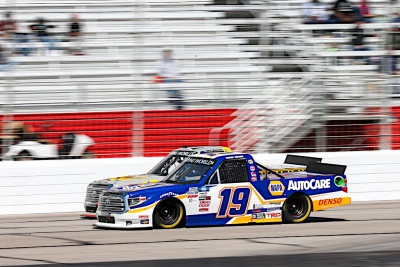 Derek Kraus and the McAnally-Hilgemann Racing team will challenge a new venue this week with their No. 19 NAPA AutoCare / Gates Hydraulics NAPA Belts & Hoses Toyota Tundra, when the NASCAR Camping World Truck Series makes its inaugural visit to the Circuit of the Americas in Austin, Texas for the Toyota Tundra 225 on Saturday.

The race will be part of an exciting weekend as NASCAR’s three national series compete for the first time on the massive 3.41-mile, 20-turn road course known as COTA, that opened in 2012.

The Camping World Truck Series is slated to take the green flag at 1 p.m. ET on Saturday, with the NASCAR XFINITY Series race scheduled to follow at 4 p.m. ET. The NASCAR Cup Series event is set for 2:30 p.m. ET on Sunday.

Saturday’s race is the second of four road course events on the schedule for the trucks this year. Kraus finished seventh on the road course at Daytona International Speedway in February. Other road races on this year’s series schedule include Watkins Glen International in August and Canadian Tire Motorsports Park in September.

MHR is working with the NAPA Distribution Centers in San Antonio and Houston in conducting sponsor activation for the Texas event, with groups of special guests slated to attend the race. Sales programs in place are also providing for VIP garage guests and a guest crew member.

Kraus and team co-owner Bill McAnally will arrive in Texas early to visit NAPA AUTO PARTS stores and meet with key customers. They will participate in a meet-and-greet in support of DENSO Radiators and AC Compressors.

Derek Kraus – About this week

What do you think about making your first visit to COTA?

“I’m excited to go there. It looks like an awesome facility and an exciting track. It’s always fun to race at a track for the first time, but this one is special.”