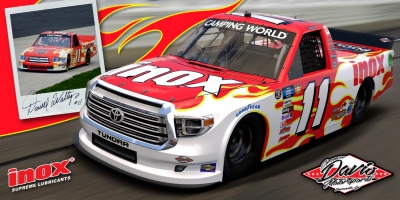 “Darrell Waltrip has done so much for NASCAR throughout his storied career both on and off the track, I only saw it fitting that we pay tribute to him this weekend at Darlington,” said Davis. “The truck looks fantastic, and I hope that we’re able to make him and all of his race fans proud carrying this iconic paint scheme on Friday night.”

Davis, 22, will make his NCWTS Darlington debut Friday night under the lights in the LiftKits4Less.com 200 – but hopes to deliver a performance that would be a reminiscence of Waltrip’s success at the track dubbed “Too Tough To Tame.”

“Honestly, I don’t really know what to expect,” added Davis. “You can prepare yourself with simulator time and even iRacing – but nothing beats actual track time. I have also been studying film and video to try and prepare myself as best as I can and hopefully all of the analysis will pay off.

“We just have to see how that first stage goes and hopefully we keep making gains throughout the race. Obviously, Kansas didn’t go as we had hoped, but we learned a lot. If we can continue to learn though and keep making steps in the right direction, there’s no reason to get discouraged.

“I’m optimistic for my first shot at Darlington that we can come out with a top-20 finish. Anything above that would be huge for us and definitely give us some momentum for Circuit of the Americas in a few weeks.”

In February, SDM announced that INOX Supreme Lubricants will serve as the team’s primary partner this season.

INOX product range was first released in 1989 with the Original INOX MX3 Lubricant. The original MX3 product was in development stages for two years prior to release with testing and focus on creating the right product for the market.

The INOX product range continues to grow with 12 products on the market, each with its own many specialized qualities used in all different industries. All their products are tested and trialed before hitting the market to ensure the best of quality is maintained in the INOX name. INOX products are available at all major industrial, electrical, automotive, hardware, bearing and mining, marine, fishing and tackle outlets, plus many more locations.

“Excited to have a long-time friendship turn into a season-long partnership with INOX Supreme Lubricants,” said Davis. “I can’t thank Angel and James at INOX enough for their continued support and partnership with our small team.

“We use their products day to day on our race team and in our machines at our business. A quality product and amazing people helped bring this all together.”

Based on metrics utilized to determine the starting lineup, Davis will start his 27th career Truck Series race from the 28th position.