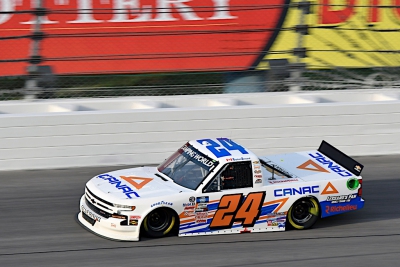 A few laps after starting 15th on the grid at Kansas Speedway Saturday night, Raphael Lessard quickly realized that his #24 Canac | Quincaillerie Richelieu Silverado understeered to the point of prematurely wearing out the right front tire so much that he was unable to keep up with the leaders. Raphael Lessard adapted his driving and fought his way back to the leaders after two long stops in the pits. His determination allowed the young Beauceron to make the most out of what he had and cross the finish line in eighth place.

The Race from the Driver’s Seat (extracts)

"The race tonight (Saturday) was not easy for me as I struggled with the #24 Canac | Quincaillerie Richelieu truck’s serious understeer throughout the race. The team made major set-up changes twice, but that did not fix the problem. The time lost working on the suspension during the end-of-segment pit stops dropped me to the back of the field but happily still on the lead lap. Over the last few laps, my right front tire was again used up. I tried to keep it as cool as possible for the last overtime restart and drove the last two laps "aggressively" to get the most out of what I had to work with. We are happy with eighth place under the circumstances," said Raphael Lessard.

Raphael Lessard and the NCWTS

After five (5) races in NASCAR trucks in 2019, Raphael Lessard competed in all 23 races of the NCWTS in 2020, his first full season at that level. His first 10 races of 2020 served him well as he worked hard with a professional team, and against seasoned drivers.

He learned more advanced driving techniques from these experienced drivers as well as from his spotter: learning new track quickly without a pre-race test or qualifying session, watching their driving trajectories and test new ones for himself as the track changes over the course of the race, managing downforce and turbulence, overtaking more effectively and protecting your position in the race, adapting to handling defects and adjusting his driving during a run, communicating effectively with the team during a run to describe any problems, managing front/rear braking distribution during a run, managing tire wear to optimize their performance at the end of the race and working in unison with team members during a pit stop.

The effects of this learning were clearly visible over the second half of the 2020 season, as Raphael Lessard caught and worked his way to the leaders several times to put himself in a position to win, as he did at Talladega, and accumulating four top-5 and seven top-10 finishes over the course of the season.

Right from his start on the track at age 11, Raphael Lessard has raced throughout the Eastern Canada and then on to the United States, establishing a solid reputation as a driver to watch along the way.

In 2020, the young Beauceron decided to leap into professional racing and competed in all 23 races of the NCWTS series (formerly the NASCAR Gander RV & Outdoors Trucks Series). In 28 starts (five in 2019) in NCWTS trucks, Raphael Lessard has won one race, finished four times in the top-5 (two podiums), and nine times in the top-10, giving him an average finish of 14.5.

In 2019, Raphael Lessard led 83 race laps, finished twice in the top-5 and three times in the top-10 in three starts in the ARCA Menards Series. He earned a win, a top five and two top10 finishes in the NASCAR Pinty's series. His NASCAR Pinty's series win came on his home track, Autodrome Chaudière in Vallée-Jonction (Quebec, Canada), on June 29, after leading 153 of 300 laps on the way to an emotional win.