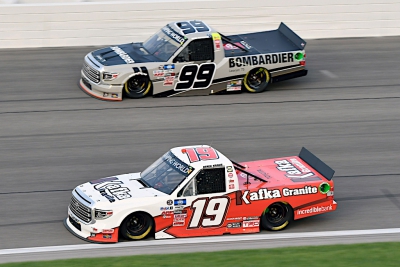 Contact with the wall, after wild restart, knocked Derek Kraus out of contention in the McAnally-Hilgemann Racing No. 19 Kafka Granite Toyota Tundra and ended his shot at a top finish in the NASCAR Camping World Truck Series Wise Power 200 at Kansas Speedway on Saturday.

Kraus was battling for sixth when he got caught up in a four-wide battle and tagged the wall just after a restart near the midway point of the race.

His MHR Tundra had been fast from the drop of the green flag. He charged from his 14th starting spot and was up to 10th in the first five laps. He finished Stage 1, at Lap 30, in ninth and was seventh at the end of Stage 2, at Lap 60.

Kraus continued to charge forward as the leaders scrambled for positions on a Lap 74 restart, but ended up smacking the wall coming off Turn 2. The subsequent damage slowed his Tundra and he began to drop back. After initially fading to 23rd, he began to battle back and gain some positions.

Any hopes of a strong rebound were dashed, however, as he was caught up when one of the leaders spun on the first restart as the race went into overtime. The MHR crew made quick repairs and Kraus went on to finish 28th.

What put you out of contention?

“The MHR guys brought a fast Tundra. It was just driver error that impacted our night badly.”