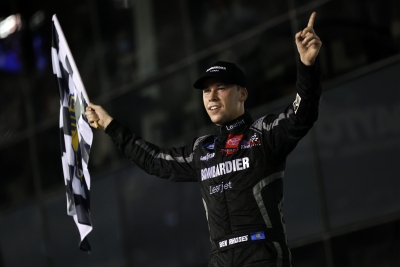 Ben Rhodes tops final practice for the Pinty’s Truck Race on Dirt with a time of 20.703 seconds.

“It’s going to be a thrilling race. This is something I never expected to happen in my lifetime,” Rhodes said in his press conference after practice.

When asked about if skills from Eldora transfer to Bristol dirt, Rhodes said, “I think it is similar. I think everything you learned at Eldora applies.”

“I feel really good about our truck; I’m really confident.”

The trend continued throughout the day as the fastest laps in this practice session were posted in the first few minutes of practice.

Raphael Lessard, who was fastest in first practice, finished 16th in the second session.

During the 50 minute final practice, there were a few stoppages. JR Heffner wrecked three minutes into the session with heavy damage to the nose and rear-end. The other break to the action happened halfway through when the caution was thrown for debris. With ten minutes remaining, Bubba Wallace spun in turn two but did not make any contact with the wall.