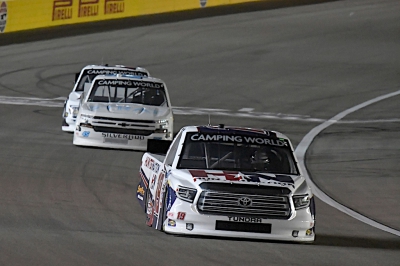 Plans for a strong finish after a top-10 start by Derek Kraus were derailed early in the NASCAR Camping World Truck Series Bucked Up 200 at Las Vegas Motor Speedway on Friday night.

Kraus started eighth in the McAnally-Hilgemann Racing No. 19 Hunter Nation/South Point Toyota Tundra and was running just outside the top 10 when his engine lost power.

He coasted to the pits and his crew went to work trying to diagnose the problem. They got the engine refired and were able to get Kraus back on track – eight laps down in 40th position.

With a never-give-up approach, Kraus kept charging throughout the race – looking to gain spots in whatever way possible. He avoided incidents on the track and took advantage of attrition that sidelined some of his competition, to finish 32nd.

Derek Kraus – Thoughts about the event

Tell us about your race?

“It was not the night we were looking for. We had a fast Tundra and expected to have a strong race, but had a mechanical problem early. Thanks to the MHR guys for getting me back out there to get as many points as we could.”