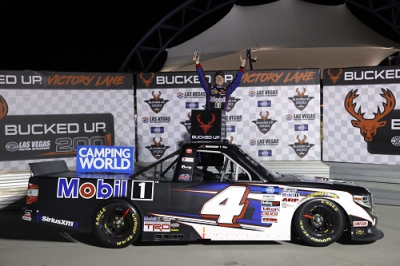 “It’s an awesome day. The goal here for us was to come here and win. We’ve been close the last two weeks and we have fast race trucks. I can’t thank everyone enough.” said Nemechek on scoring his first win with the team. “The opportunity to come here and race in the Truck Series for Kyle Busch Motorsports is an amazing opportunity and we’re capitalizing on that. We want to be the dominant one this year and we want to win as many races as we can. It’s awesome to get it kicked off here in Vegas and beat the boss.”

Placing runner-up was Nemechek’s teammate and bossman Kyle Busch. The Las Vegas Cup Series veteran and truck series team owner led 16 laps of the event before cutting a tire and drawing out the yellow on lap 90. Busch came to pit road to change tires and repair damage sustained to the rear-quarter … putting him a lap down. Busch, the winner of stage two, received the free pass three laps later, placing the No. 51 Toyota back on the lead lap.

“We just didn’t have enough in our Cessna Tundra. They (Nemechek’s No. 4 team) were a little bit better than us so not sure what differences they had,” said Busch. “I was just really tight and really rough over the bumps, trying to get through the bumps. Looking at the splitter wear, it was really rough on the splitter and wearing through it. We were battling some little things, but overall our truck was still fast. It was cool to come home one-two.”

Nemechek, winner of stage one and on baby watch, will go into the next event at Atlanta Motor Speedway on March 20th with two top-five and three top 10s through three events in 2021.

“He was faster than me in stage two, so I really didn’t know, said Nemechek on teammate Kyle Busch. “It was all about using our truck to the best we could possibly do, wrapping the bottom and taking the dirty air away. He had to run up and it created more lap time for him. Overall, it was an awesome victory. I wish my wife Taylor was here. She had to stay home because we are about to be on baby watch. It’s awesome.”

One of the stoppages involved seven trucks in turn two on lap 98 that included most notably Hailie Deegan and Sheldon Creed. Austin Wayne Self, Raphael Lessard, Bret Holmes, and Ryan Truex were also involved.

The final yellow came out on lap 124 in turn two involving the four trucks of Chase Purdy, Jordan Anderson, Tyler Ankrum, and Parker Kligerman. That wreck ended the evening for Ankrum while everyone else continued.

The next race for the truck series will be at Atlanta Motor Speedway on March 20th. The Fr8 Auctions 200 will take place at 2:30 p.m. ET. live on FS1 and MRN Radio.