Ryan Ellis will be doing a driver diary for Speedway Digest on a monthly basis. This year, he is running for FDNY Racing in the NASCAR Camping World Truck Series, and is in the process of signing with other teams to run more events.

As the first part of this series, the 25-year-old breaks down his path to NASCAR’s top divisions. Take a look at his perspective of what life is like when the odds are against an up and coming driver:

First off, thanks for reading this blog. A lot of you may know me from Twitter conversations, seeing my name go across the top of the screen during a NASCAR race or maybe we’ve met at the track sometime. For our first blog, I figured I’d do something simple … who is Ryan Ellis?

I’m a third generation racecar driver from Northern Virginia. I went to college at George Mason University, a member of the Kappa Sigma Fraternity and played college hockey. To say the least, I’m not your normal NASCAR driver.

My family has been involved in racing since the 1950s. My grandfather raced Sprint Cars his whole life, and lost his life in a horrible crash while racing in 1958 – the same year my father was born. Even with this loss, my father still found his way into racing as soon as he could. He raced motorcycles until his body was too worn out and eventually moved on to cars.

As far back as I can remember, I was spending my weeks at race tracks. No, I wasn’t like the Dillon brothers, waking up and spending time with Dale Earnhardt Sr. or anything of that nature. I was spending time at local tracks, watching my father at his local races.

I was born in California and spent most of my days as a child – either at a race track, or dreaming of being at a racetrack. While most little kids would sleep with stuffed animals, I would sleep with toy motorcycles. I used to wake up with imprints of toy motorcycles on my face every morning from it. Before I could walk, I would crawl to my little Power Wheels Jeep and drive it around the kitchen. Where I grew up in Southern California, speedway motorcycle racing was huge, and I was a big fan of many local racers.

When I was four years old, my father saved up enough money to get me my first quarter midget. I ran my first race that year, and nearly won it against many kids that were two or three times my age. I ran quarter midgets for seven or eight years, accumulating national championships and track records before moving onto Legends cars when I was 11 years old.

Racing Legends cars across the east coast, I competed against some really big up and coming drivers. At that point in time, they were just other drivers I was racing against, even as a 12-year-old. You learn a lot about maturity racing against adults three or four times your age. You have to earn respect. 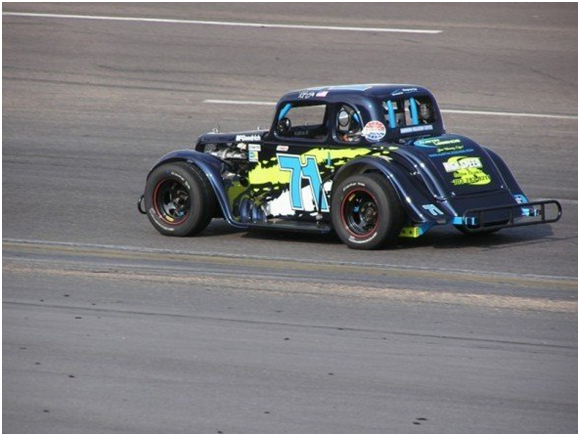 As a kid, you don’t have a lot of fear, and you have to learn to carry yourself as an adult. If an adult pushes you around on track, you have to learn to drive them the same way. It was weird for me as a soft-spoken kid, but I learned how to do it over time. I got to race against some big names and little did I know we would all end up in the same place years later, including the Busch brothers, the Dillon brothers, my buddy Matt DiBenedetto, Jake Crum, the Buescher cousins, Jordan Anderson and many more that don’t come to mind right now. I did that until I was around 16 years old, when I got a shot with a local Late Model team that wanted to take me to what was then known as the Hooter’s Pro Cup Series.

Long story short, the team promised big things and nothing came through. The team stole a lot of resources and sponsorship money from our family, and we ended up taking them to court. I was leading Rookie of the Year standings at my local track and was progressing quickly.

We were out of sponsorship money and honestly, out of hope to keep moving my career forward, so we moved to the road-racing world. I got a shot with a local Spec Miata team and learned the ropes of road racing while we fought to get our resources back from the Late Model team. 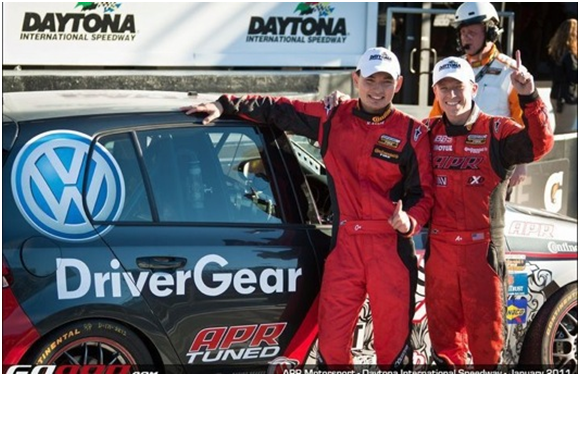 Somehow, through all of this with some great family friends and personal investors, I tried out for a series you guys have probably never heard of –the Volkswagen Jetta TDI Cup. It was a reality TV show with all cars “evenly” built and provided by VW. Thousands of people applied to be in the series and 100 or so got invited to their tryouts, and 25 made it.

With my long resume and driving experience, I made it in 2010. In my second year, I had a great season. I won the most races, was one of the leaders in laps led, tied for most poles and had the fastest race lap multiple times. This caught the attention of Volkswagen and a Grand-Am team, APR Motorsport.

2011 was a huge year for me. Volkswagen and APR signed me to a rookie Grand-Am deal. In my first race of my rookie season, I qualified on pole, led every lap and won my first Grand-Am race with teammate Ian Baas. We also won the second race of the season and nearly won the championship. I finished third in the standings and won ST Rookie of the Year.

During the first race of the year in this series, a prospective team owner named Fran Hall was looking for a development driver to set up his prototype-like car, the Superlite Coupe. With my effort as a rookie, I caught his eye and signed a deal to be his number one driver. I still think to this day, without the track time I got in this car, I never would have gotten approved to get my NASCAR license.

In 2012, I got an amazing phone call while I was still racing in Grand-Am full-time. I had been happy in the road racing world, but was still struggling to find a funded ride. It’s hard when you’re young to convince someone to invest with you, especially in road racing where they value experience and age.

I got a phone call from a mutual friend who knew Jimmy Means, owner of the No. 52 NASCAR Xfinity Series team. He needed a driver to race his car at 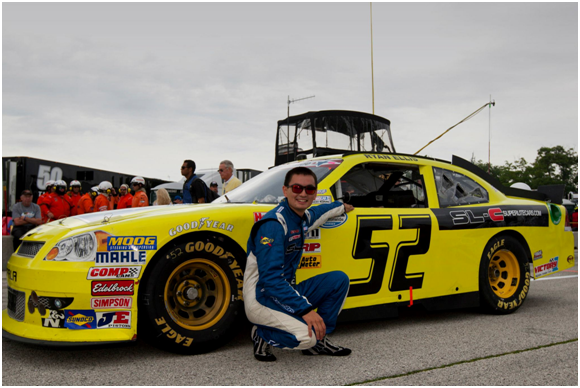 Road America. His young driver, Joey Gase, couldn’t do it and I was one of the first people he called. I was already going to the track, so I of course said yes. I was completely blown away that I was making my NASCAR debut.

Fast forward again to 2013, I got some sponsorship money together after a few more start and parks. I did my first race with SR2 Motorsports and it went awesome. They needed someone to finish their season and I was their guy. It was an amazing feeling. That’s where I met my racing mentor and one of my best friends, Blake Koch, who was my teammate there.

In January of 2014, I had a big decision to make. I was either going to finish school at GMU, or move to North Carolina to continue pursuing a NASCAR career. My school wasn’t allowing me to miss exams for racing, and I kept failing the same classes because I couldn’t make up exams. I flipped a coin, it landed on North Carolina. I left Northern Virginia and moved to Mooresville, N.C., where I knew absolutely no one.

In 2014, I got a call from Blake Koch that he couldn’t stick around for preseason Daytona testing, and he needed someone to test the No. 28 FDNY truck he was supposed to race in a month. Of course I said yes.

Somehow, we ended up at the top of the charts. The FDNY Racing guys had never been the fastest truck before, so it was huge for them and earned me the job I still currently hold with them.

Throughout the first few weeks of the 2014 season, I met many great friends. I met Tanner Berryhill because I was talking to his dad about racing for their Vision Racing team at Daytona. I met Matt DiBenedetto, who was racing for The Motorsports Group at the time, because I was asking him about a few jobs. In both encounters, I shook hands and acted very professionally.

I don’t think either of them remembers us meeting as well as I do. It was awkward. I’m glad we are all friends because I thought they were all weird then.

Now I appreciate how weird we all are mutually together. We all go to lunch together at least once a week, and when we travel, we typically go together. They’re all great friends of mine and we all try to help each other out. Since then, we’ve had some more guys hang out with us, namely Alex Bowman and Jeffrey Earnhardt among others. It’s a fun group.

As for racing, well …

The rest is history. Here I am. I have raced for a ton of teams. I know a lot more people in NASCAR than I did last year, and I’m hoping this year will be the best yet.

It’s crazy. I took the most zig-zagged route ever to get here. I don’t have family money, and I don’t have friends who own big businesses. I’m working my tail off to get to the top. I want to make my grandfather and family proud, and I want to earn it. I’m here to stay kids.

Rate this item
(1 Vote)
Tags
Tweet
« Ryan Newman to drive the No. 8 Chevrolet Silverado for SWM-NEMCO Motorsports Justin Boston Ready to Return to Racing at Kansas »

Joseph Wolkin (@JosephNASCAR) is a sophomore at the Queensborough Community College as an English major. He’s a native of Whitestone, NY, just outside of New York City, and has been attempting to find roots of motorsports within his area since 2004. He started out as just a fan, but over the course of his high school career, he ended up falling in love with writing.

Joseph has been covering NASCAR since 2011 for several different websites. Recently, he was named as one of two lead NASCAR columnists for Rant Sports after working for the site for over one year. Working with Rant Sports for approximately 14 months, Joseph has covered New York City area sports teams such as the New York Giants, New York Mets, New York Rangers, New York Islanders and more.

Through his passion is for NASCAR, Joseph has adapted to changing times and realizes that he has numerous opportunities in the journalism work. As one of the top young sports writers, his goal is to become one of the top motorsports writers of this new digital media era. However, he also believes that it’s important to stick to the traditional routers of print publications after seeing his high school newspaper dissolve due to a lack of funding.

Currently, besides his duties with Speedway Digest, Joseph is a columnist with Fronstretch.com, Motorsport.com and has a weekly article in NASCAR Pole Position's digital version - ROAR! Weekly Race Preview Magazine.