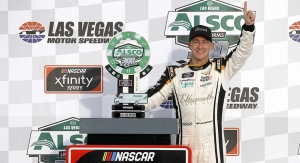 Allmendinger, who is driving part-time this season for Kaulig Racing, earned his fourth career win in the Xfinity Series and first on an oval.

“I won on an oval. Do you like that? Whoo!” Allmendinger told Fox Sports after his win on Saturday afternoon.

“This car was awesome,” Allmendinger said. “This is Atlanta. The car was awesome on long runs, probably better than the driver early. Once I got in the lead, I was just trying to hit my marks, which is hard to do.”

Allmendinger was not originally scheduled to drive next weekend at Homestead-Miami Speedway but Kaulig Racing president Chris Rice told the media that they will field a car for Allmendinger in the second of four Dash 4 Cash races.

Noah Gragson, who finished second on Saturday, took home $100,000 dollars thanks to being the highest placing driver in the Dash 4 Cash.

Rounding out the top five were Noah Gragson in second, Justin Haley in third, Daniel Hemric in fourth and Harrison Burton in fifth.

Rounding out the top ten were Justin Allgaier in sixth, Ross Chastain. In seventh, Brandon Jones in eighth, Chase Briscoe in ninth and Anthony Alfredo in tenth.

The NASCAR Xfinity Series will head to Homestead-Miami Speedway on Saturday, June 13 at 3:30 p.m. ET on FOX and again on Sunday, June 14 at 12:00 p.m. ET on FS1. Dale Earnhardt Jr. is scheduled to drive the No. 8 on Saturday for JR Motorsports which he owns.

Three days removed from the Camping World 500 at Phoenix, massive penalties were handed down to the teams of two Monster Energy NASCAR Cup Series drivers Brad Keselowski and Kevin Harvick.

Keselowski and his No. 2 Alliance Truck Parts Ford team finished fifth in the 314-lap race but that finish will now be encumbered as they failed post-race inspection. Along with crew chief Paul Wolfe being suspended for the next three races and fined $65,000, the team also loses 35 driver and owner points. This is known as a L1 penalty. Although he already has a win from Atlanta a few weeks ago, Keselowski took a hit in the points standings, moving from second to fourth.

Harvick’s team was also assessed a L1 penalty for an unimproved track bar mount, which was discovered earlier today at the NASCAR R&D Center in Concord, NC. Crew chief Rodney Childers has been, suspended for the upcoming weekend at Auto Club Speedway in Fontana, fined $25,000. The No. 4 Jimmy John’s Ford team also lost 10 driver and owner points, which bumped Harvick from seventh in the MENCS standings to ninth.

According to NBC Sports’ NASCAR America, the No. 2 team will evaluate on whether to appeal. The car returned to the shop from the west coast and the area that NASCAR found to be violated is being evaluated as well. While there has been no word from Stewart-Haas Racing on whether the team will appeal or who will sub for Childers, Brian Wilson, former chief engineer on the Keselowski team will be on the pit box in California.

After running into Cole Custer under caution during the NXS race in Phoenix, the DC Solar 200, Austin Dillon will not be penalized. The driver of the No. 2 Rheem Chevrolet was parked after 190 laps.

AJ Allmendinger’s No. 47 Chevrolet crew chief Randall Burnett has sat out of the west coast swing after only 17 of 20 lugnuts were found tight at Atlanta. Burnett was fined $65,000 and suspended for three races. The team’s appeal was upheld earlier today.

After a weekend in Atlanta, penalties were handed down in all three of NASCAR’s top series.

AJ Allmendinger’s No. 47 Kroger Click List Chevrolet team has received a L1 level penalty for lug nuts not properly installed. At the end of the Folds of Honor Quiktrip 500 at Atlanta Motor Speedway, it was discovered that Allmendinger’s machine had only 17 out of 20 required lug nuts intact.

The JTG Daugherty Racing team’s 26th-place finish is encumbered per Section 12.10. No. 47  crew chief Randall Burnett has been fined $65,000 and suspended for the next three Monster Energy NASCAR Cup Series events, which includes NASCAR’s ‘West Coast Swing’. The team has also lost 35 driver as well as 35 owner points.

Under Sections 20.17.3.2.1.2, Kyle Busch’s winning Rinnai 250 machine failed post-race inspection. The No. 18 NOS Energy Drink Toyota’s finish is also encumbered per Section 12.10 and was found to have measurements outside of NASCAR’s allowed tolerances.

The No. 23 Allegiant Airlines/NAPA Auto Parts Chevrolet piloted by Chase Elliott in the Active Pest Control 200 also failed post-race inspection as it was found to have measurements outside of NASCAR’s tolerances. The NCWTS entry also did not have lug nuts properly installed.

Along with an encumbered finish, the team lost 10 truck series owner points. Crew chief Jeff Stankiewicz was fined $5,000 along with an additional $2,500 for the lug nut violation. Stankiewicz has also been suspended from the next NCWTS event at Martinsville Speedway.