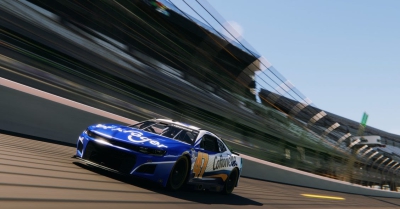 JTG Daugherty Racing celebrates the return of Kimberly-Clark (NYSE: KMB) as an elite partner of the No. 47 Kroger® Racing program for a multitude of races during the 2023 NASCAR Cup Series season.

The news broke today during a Kroger® Racing kickoff meeting at the Great American Ball Park. Kimberly-Clark brand representatives and their driver Ricky Stenhouse Jr. uncovered the Daytona 500 car featuring the Cottonelle® brand on the No. 47 Kroger® Camaro for the iconic season-opener on Sunday, February 19th airing on FOX.

“Kimberly-Clark is excited to kick off another season of racing with JTG Daugherty Racing and Ricky Stenhouse Jr. behind the wheel,” said Elizabeth Metz, North American Vice President of Cottonelle® and Scott®. “Cottonelle® is honored to be featured on the No. 47 Kroger® Camaro for one of the most important races of the year and we wish Ricky the best of luck this season!”

“Having a long-term partner and being able to showcase them in the biggest race of the year where they see the value is special,” said Stenhouse Jr. “It’s cool to have Cottonelle® with us for the Daytona 500. Daytona doesn’t owe us one, but we’ve got unfinished business there. Also, Mike Kelley has stepped into a crew chief role to lead the team. We have a long history, and we have won races and championships together. We are ready to get the season started.”

Additionally, Kimberly-Clark announced the full lineup of their brands for the racing season. Their second race highlights Viva® Paper Towels on the No. 47 Kroger® Camaro in Northern California at Sonoma Raceway’s 2.52-mile road course. The 110-lap event airs Sunday, June 11th on FOX.

“We’re thankful to have Viva® Paper Towels on our Kroger® Camaro at Sonoma,” said Stenhouse Jr. “Our road course program improved throughout the 2022 season. We know we will be better when we return.”

For the NASCAR Cup Series Race at Richmond, Kleenex® fully takes over the car design for the 400-lap event on Sunday, July 30th (airing on USA) around back to school timing and before flu season is in full swing.

“We had a fast car at Richmond and feel really good about going back there with Kleenex®,” said Stenhouse Jr. “We were fast, but some speeding penalties cost us. We learned from our mistakes and are ready to get back there to have a good run with Kleenex®.”

For Kimberly-Clark’s final race of the year, SCOTT® Brand primarily covers Stenhouse Jr.’s Camaro in the Bass Pro Shops Night Race at Bristol Motor Speedway on Saturday, September 16th (airing on USA). It is Stenhouse Jr.’s favorite track on the circuit, and the Olive Branch, Mississippi native has multiple runner-up finishes at the .533-mile concrete oval.

“SCOTT® Brand has visited victory lane before with JTG Daugherty Racing, and it’s good luck to have them with us at Bristol,” said Stenhouse Jr. “We can be fast there, but we must protect ourselves and keep from being wrecked to contend. We’re glad to have the support of SCOTT® Brand for the 500-lap event under the lights and cannot wait to get the season started.”