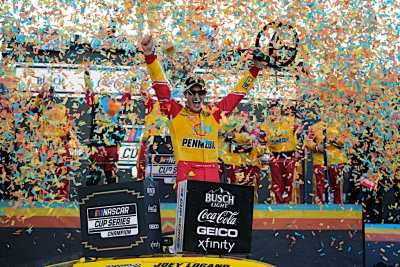 Joey Logano won the NASCAR Cup Series Championship race on Sunday, securing his second career title with Team Penske. The driver's championship is Ford’s tenth overall and seventh in the modern era (1972-present). The victory marked Logano’s fourth points win of the season, third at Phoenix, and the 31st of his career in 507 Cup Series starts.

“Congratulations to Ford Performance, Roger, Joey, Paul, and everyone at Team Penske on the race win and the 2022 driver’s and owner’s championships,” said Doug Yates, President and CEO of Roush Yates Engines. “To see all of this year’s hard work come together is a proud moment. That was an intense race in which Joey and Paul executed flawlessly. We are blessed to be a part of the Ford family, providing the horsepower to win with these fast Ford Mustangs.”

“It’s been a great season for the sport, I think, just with the Next Gen car coming in and it definitely mixed things up a lot. We did start out well in many ways with the win in the Daytona 500. We were fast at some of the early races. Chase Briscoe won here, but then we seemed to struggle a lot and a lot of it was just coming to grips with the new car and really optimizing. It’s different at every track and we found that we could get the setup right across our teams at some of the different tracks, but not at all of them. It’s part of learning the new car and I think definitely in the second half of the seasons, the last third of the season came on really strong. There was a lot of extra work from Doug Yates and Roush Yates Engines and some extra power that they’ve been bringing these last couple races and it all came together and really strong today,” commented Mark Rushbrook, Global Director of Ford Motor Company.

“Race wins are nice, but championships are what it’s all about. We worked so hard the last couple weeks trying to put ourselves in position. And everything that happened in 2020, I knew we just wanted to have a solid run and do this today. I can't thank Ford and Shell-Pennzoil enough for supporting me over the last 10 years and getting us a couple championships,” commented Logano.

Joey Logano started Sunday’s battle for the Championship from the pole position and carried the momentum throughout the race. A total of six Ford Performance drivers started in the top 10 with Logano including teammate Ryan Blaney in P2, Chase Briscoe with Stewart-Haas Racing in P3, Harrison Burton with Wood Brothers Racing in P6, Kevin Harvick with Stewart-Haas Racing in P7, and Cole Custer with Stewart-Haas Racing in P9. Logano led the first 87 laps of the 312-lap event. After passing Ford Performance teammate Chase Briscoe with 29 laps to go, Logano was able to maintain the lead over teammate Ryan Blaney and hold off fellow playoff contenders. Logano led a race-high 187 laps, capping a day in which Ford led 310 laps of the 312-lap race. Four Ford drivers finished in the top 5: Team Penske’s Ryan Blaney in P2, and Stewart Haas Racing’s Chase Briscoe in P4 and Kevin Harvick in P5.