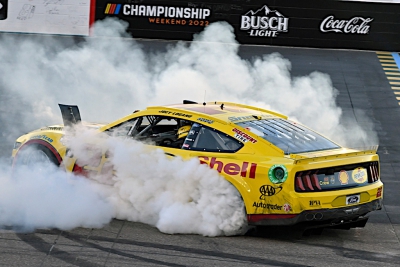 Joey Logano and the No. 22 Shell-Pennzoil Ford Mustang race team finished the season where they began - in victory lane. Logano, capped off the 2022 NASCAR Cup Series (NCS) season with his second championship title in four years following Sunday’s victory at Phoenix Raceway in the NASCAR Championship Race.

This was Logano’s third win at Phoenix and 31st of his career. Logano began the year by winning the Busch Light Clash in Los Angeles’ Memorial Coliseum — the first win for NASCAR’s Next Gen race car that debuted this year.

Logano, who began his career in 2009 as the NCS “Rookie of the Year is clearly building a Hall of Fame resume in NASCAR’s top division. This was Logano and the Shell-Pennzoil race team’s fifth time qualifying for the “Championship 4” since joining Team Penske in 2013 (2014, ’16, ’18, ’20, ’22). The 2022 title is Logano’s second after earning his first career NCS title following the 2018 season and the first for Shell and Pennzoil as primary sponsors.

“What an honor to a part of this moment in racing history. This was a fantastic way to cap off an outstanding season, and we are extremely proud of Joey, Roger Penske and the entire team,” said Steve Reindl, president, Shell Lubricants North America.  “We are grateful to be a part of a winning tradition at Team Penske, where Shell and Pennzoil play a critical role in the team’s performance. Pennzoil is not just on the hood -- it’s under the hood. Through our relationship with Penske, we are using the knowledge and success from the track to develop the next generation of high-quality products for customers.”

The Pennzoil Synthetic race oil in the No. 22 car is formulated using a revolutionary process which converts pure natural gas into high quality full synthetic base oil.  In addition to blending a unique formulation for the Ford engine, Shell scientists collaborate with Team Penske engineers week to week to optimize engine performance.

“We really couldn’t do what we do, including competing for wins and championships, without the relationship we have with the scientists and everyone at Shell,” said Travis Geisler, Director of Competition at Team Penske. “When we ask to get something out of the motor oil that we put in our engines each and every week, they do whatever it takes to give us optimum performance, efficiency and reliability. It is that unique relationship that goes beyond having their name on the side of our car that makes what we do possible.”