Kyle Busch End of an Era 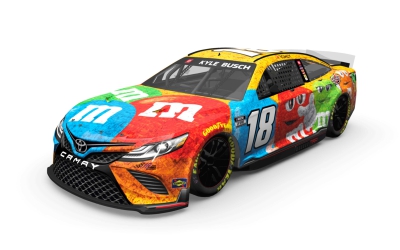 While Sunday’s NASCAR Cup Series Season Finale 500k at Phoenix Raceway marks the end of the 2022 season, the race will also mark the end of multiple eras, as well.

Kyle Busch, driver of the No. 18 M&M’S Thank You Fans Toyota Camry TRD for Joe Gibbs Racing (JGR), will be making his final start with the team he first joined as a 22-year-old in 2008, and partner Mars and its iconic M&M’S brand will be making its final appearance as a team primary sponsor. Over the last 15 seasons, the combination of Busch, the Mars Wrigley brands, and JGR have proven to be a winning one. The team, driver, and sponsor combination has accounted for 56 wins and two Cup Series championships during their time together.

In addition to the special paint scheme on the No. 18 M&M’S Camry this weekend, the Grand Marshal Toyota Camry pace car will be wrapped with M&M’S branding as it circles the Phoenix Raceway mile oval prior to Sunday’s race.

Once the green flag waves, Busch will look to win at a place where he knows victory lane well. He won at Phoenix for the first time in the fall of 2006, but went 12 years before his next turn at tasting victory there when he won back-to-back in the fall 2018 and spring 2019 races. Those were the first two events on the renovated and reconfigured track surface with the start-finish line moved from what is now the backstretch over to the dogleg in front of the new main grandstand. Busch, in fact, has led a whopping 491 laps since the track was reconfigured and has added two more top-five finishes to those aforementioned wins at Phoenix.

Even though the M&M’S driver went 25 races between wins on the mile oval, he has been incredibly consistent throughout his career there. In 34 Cup Series starts at the “Diamond in the Desert,” Busch has 12 top-five finishes and 24 top-10s while scoring top-fives in nine of his last 14 starts there, including those back-to-back victories in 2018 and 2019.

So as the Cup Series season comes to an end, and Busch, M&M’S and JGR head to the racetrack one final time together, the two-time Cup Series champion will hope to wheel his No. 18 M&M’S Camry to victory lane once again and bring down the curtain in style, much like he has over the last 15 years.