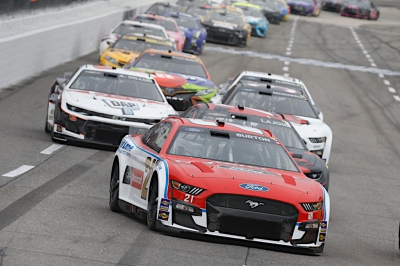 Harrison Burton and the No. 21 Motorcraft/Quick Lane team backed up a strong qualifying effort with a 12th-place finish in Sunday’s Xfinity 500 at Martinsville Speedway.

Burton qualified 10th on Saturday, his fourth top-10 start of the season, then posted his fourth finish of 12th or better this year in Sunday’s 500-lapper on the venerable half-mile oval.

Just after the drop of the green flag, Burton settled in just outside the top 10 and ran there for the remainder of the caution-free, 130-lap first Stage, where he wound up 14th.

After a pit stop for fresh tires and fuel, he restarted 13th in the second Stage, which also ran caution-free other than the yellow flags at the Stage breaks. Burton dropped off the lead lap in the closing laps of the Stage but again finished 14th. He was able to remain in the Free Pass position and rejoined the lead lap for the start of the third segment of the race.

As the recipient of the Free Pass he had to restart at the rear of the field but was able to move by the lap-down drivers when a caution flew at Lap 274 for a spin by Brad Keselowski.

Burton moved into the top 10 with a little over 200 laps left and ran there until a caution flag at Lap 321 for a wreck by Austin Dillon.

An issue on the ensuing pit stop dropped him to 14th in the running order. He fell as low as 16th but moved back up four positions in the final 25 laps to finish 12th.

Burton and the No. 21 team now head to Phoenix Raceway for the season-ending Cup Series Championship race on Nov. 6.