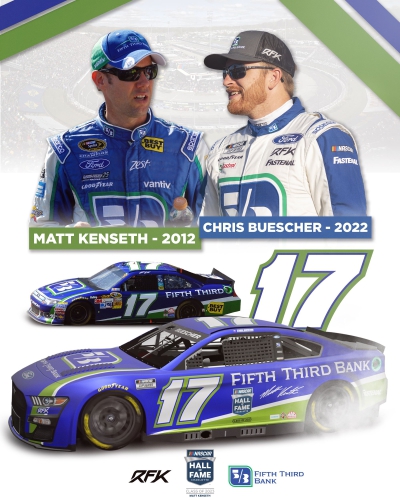 RFK Racing and Fifth Third Bank will honor Matt Kenseth and his upcoming induction into the NASCAR Hall of Fame with a special paint scheme on Chris Buescher’s No. 17 Ford at the upcoming NASCAR Cup Series race at Martinsville Speedway. Kenseth, who scored Jack Roush’s first Cup championship in 2003, originally piloted the No. 17 Fifth Third Bank Ford in 2012 and this weekend’s scheme will be a nod to that originally livery.

“Matt is really one of the guys that helped to put us on the map,” said Hall of Fame team owner Jack Roush. “Mark (Martin) brought to my attention early on and was adamant that we needed to sign Matt and put him in a car.

“He ended up being one of the most talented and productive drivers in the sport’s history and we are very proud to see him be honored and inducted into the NASCAR Hall of Fame.”

Kenseth piloted the No. 17 Ford from 2000-12, accruing one of the most successful tenures in the sport’s history. He was named the Cup Series rookie of the year in 2000, before becoming RFK’s first Cup champion in 2003. A perennial championship contender in the No. 17, Kenseth went on to win 24 races for Roush, including a pair of Daytona 500 Championships in 2009 and 2012. The latter marked the team’s historic 300th NASCAR victory.

Kenseth returned to RFK in 2018, piloting the famed No. 6 Ford in 15 events, while closing out his tenure with the team with a pair of top-seven finishes at Phoenix and Homestead. He will join Roush and Martin in the NASCAR Hall of Fame, when he is officially inducted in January.

The throwback Fifth Third Ford will be on track first this Saturday at 12 p.m. ET, followed by qualifying at 12:45 p.m. Race coverage Sunday is set for 2 p.m. ET on NBC, with radio coverage set for MRN and SiriusXM NASCAR Radio.

Buescher is coming off a 15th-place run at Martinsville this spring where he qualified fourth, and last fall finished ninth in this race for his first top-10 at ‘The Paperclip.’