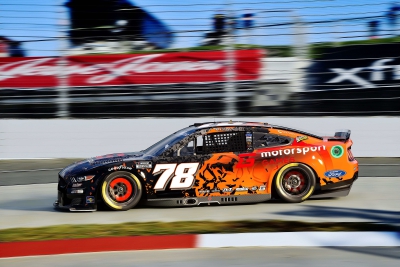 “I’m looking forward to back-to-back racing with Motorsport Games,” said driver and co-owner, B.J. McLeod. “We had a blast with their team at Homestead Miami Speedway and look forward to doing it again this Halloween weekend at Martinsville Speedway. We’ve run a ton of awesome paint schemes with Motorsport Games this season including NASCAR Ignition, NASCAR Rivals, the “Skull Car” and Frankie Zombie’s Z222. This weekend’s Halloween-themed No. 78 Motorsport Games Ford is up there with them.”

“Live Fast Motorsports is extremely thankful for all of Motorsport Games support over the past two years,” said team co-owner, Matt Tifft. “I first got my interest in NASCAR from playing racing video games, so this partnership has always been a natural fit for myself and BJ! I’m excited to see what’s in store for both brands in the future.”

Motorsport Games and Live Fast Motorsports are eager to get spooky on the track at Martinsville Speedway. Cheer on B.J. McLeod in the Motorsport Games No. 78 Ford Mustang on Sunday, Oct. 30, 2022, at 2 PM ET on NBC. Purchase tickets to the race at www.martinsvillespeedway.com/event-calendar/.