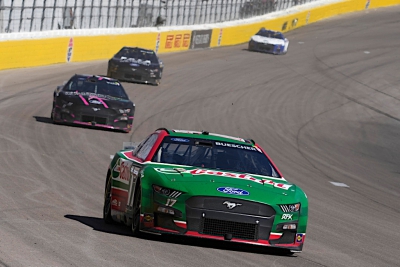 Chris Buescher overcame an early deficit Sunday at Las Vegas Motor Speedway and drove his Castrol Ford through the field late to finish 15th, his best finish in four races at the 1.5-mile track.

Following a qualifying effort of 12th, Buescher was the first car to hit pit road at lap 35 as a green-flag pit cycle was the first pit sequence of the afternoon. He ran 29th to end the opening stage of 80 laps and found himself a lap down to the leaders.

He reversed that though just a few laps into stage two when he earned the free pass under caution at lap 95. He ultimately finished the second stage in 29th. He fired off 29th in stage three and was again awarded the free pass with just under 100 to go, and from there began to pick off multiple positions in the closing laps.

Three cautions flew over the final 38 laps, aiding in Buescher’s charge through the field. He was 25th with 40 to go and restarted 16th with 16 to go, before going on to secure the 15th-place run.

The NASCAR Cup Series heads to Homestead-Miami Speedway next weekend. Race coverage Sunday is set for 2:30 p.m. ET on NBC, with radio coverage on MRN and SiriusXM NASCAR Radio.