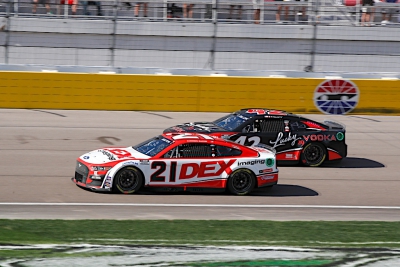 After a promising performance in qualifying, Harrison Burton and the No. 21 DEX Imaging team came away with a 26th-place finish in Sunday’s South Point 400 at Las Vegas Motor Speedway.

Burton started a season-best eighth in Sunday’s 400-miler but fell out of the top 10 during a 78-lap green-flag run that opened the race.

The DEX Imaging team made a handling adjustment during a green-flag stop on Lap 37 and ended the first 80-lap Stage in 22nd place.

After more tuning during a pit stop following the end of the Stage, Burton rejoined the race in the top 20 and remained there for much of the second Stage before ending that segment in 25th place.

In the third and final segment of the race Burton ran inside the top 25 until a brush with the wall led to him losing two laps while the DEX Imaging crew repaired the rear suspension.

He regained one lap by getting the free pass when the caution flag flew with 20 laps remaining, but the caution flag he needed to rejoin the lead lap never flew and he wound up 26th, one lap off the pace.

Burton and the No. 21 team now head to Homestead-Miami Speedway for the Dixie Vodka 400 on Oct. 23.