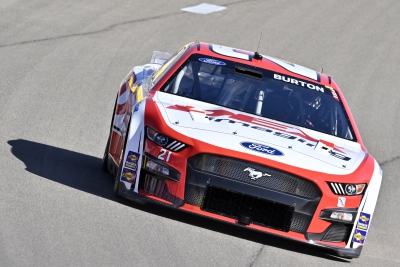 Harrison Burton and the No. 21 DEX Imaging team matched their best qualifying effort of the season with an eighth place in time trials for Sunday’s South Point 400 at Las Vegas Motor Speedway.

In Saturday’s qualifying session, Burton turned a lap at 182.908 miles per hour to put four Ford Mustangs in the top eight starting spots.

It was his third top-10 start of the season, joining another eighth-place start in the season-opening Daytona 500 and a ninth at Gateway in St. Louis.

Burton’s qualifying speed significantly bettered his best lap in practice earlier in the day. His best lap there, at 181.178 mph came in the fifth of the 25 laps he ran in the session.

He was ninth best among drivers who ran 10 consecutive laps, averaging 179.953 mph over his first 10 laps on the track.