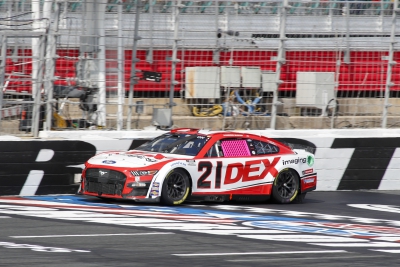 Harrison Burton and the No. 21 DEX Imaging team head to Las Vegas Motor Speedway hoping to build on their encouraging run there in the Pennzoil 400 back in March but also facing some new challenges.

“During our first trip to Las Vegas earlier this year, the No. 21 Ford scored a top-20 starting position and a 16th-place finish,” said crew chief Brian Wilson. “Those were solid results early in the year, and we look to improve on them as we head back.”

But over the course of the season, Wilson’s crew, like their competitors, has been able to learn more about the new car, which means the set-ups from March will need some tweaking.

“The first race was early in the learning curve of the Next Gen car, and our return trip is with four races to go in our season,” Wilson said. “If you bring the same set-up you’ll be behind the field.”

Another change from the most recent race at Vegas is in the tires. Goodyear, the exclusive tire supplier for the Cup Series, is bringing to Las Vegas a different tire combination which has reduced stagger, which means the right- and left-side tires will be closer to the same circumference.

And that suits Wilson and the DEX Imaging team just fine.

“We’ve recently run this tire combo at Kansas and Texas, where we saw Harrison take the lead early in the race,” he said. “We’ll look at our notebooks from those recent races and try to unload with competitive speed this weekend.”