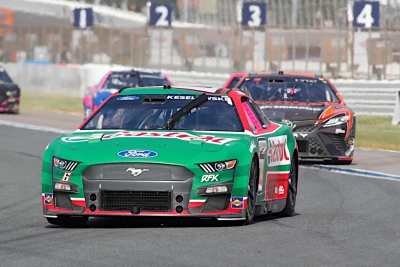 Brad Keselowski used a meticulous blend of speed and strategy to work his No. 6 Castrol Ford through the field in Sunday’s race at the ROVAL. He was poised for a top-10 finish before being forced through the chicane after a wild and wooly restart on a green-white-checkered overtime finish, forcing the team to settle for a 14th-place finish.

Keselowski and teammate Chris Buescher were both forced to start at the rear of the field after an unapproved adjustment to the steering rack after Saturday’s qualifying session. He was able to move up to as high as 26th before pitting under green near the end of stage one. The No. 6 team started the second stage in the 18th position and cracked the field’s top-10 halfway through stage two.

Unfortunately, contact from the No. 2 would result in the Castrol Ford losing a good amount of positions, placing Keselowski in 14th to finish out the race.

Las Vegas Motor Speedway is the next stop for the NASCAR Cup Series. Race coverage next Sunday is set for 2:30 p.m. ET on NBC, with radio coverage on PRN and SiriusXM NASCAR Radio.