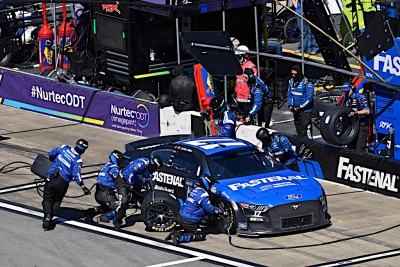 Buescher at the ROVAL

Scott Graves at the ROVAL

QUOTE WORTHY
Buescher on racing at the ROVAL:
“As I’ve said the last few weeks, we feel really good about our chances with every type of track and race remaining on the schedule, and that is surely the case this weekend with our final road course of the year. Last year we got really close in this race, and since have made huge strides in figuring out road courses, so we feel good about our Fastenal Ford entering the weekend.”

Last Time Out
Buescher finished 25th at Talladega last weekend after a late pit sequence shuffled him amongst the strong field still remaining.

Fastenal, in its 12th season with RFK in 2022, makes its 18th appearance with the No. 17 this weekend. In its early days with RFK, Fastenal originally was a partner with the No. 99 team before moving over to the No. 17 team since. They were also the primary partner on the No. 60 Xfinity Series entry that captured the owner’s championship in 2011.

Fastenal will feature top suppliers 3M, Apex, Widia, Protective Industrial Products (PIP) and Shurtape on Buescher’s No. 17 this weekend. For more information on these suppliers, visit Fastenal.com, and stay up-do-date on social @FastenalCompany.

In support of Breast Cancer Awareness Month, in conjunction with the Kurt Busch Foundation and the NASCAR Foundation, both RFK cars this weekend will run pink window nets. At the conclusion of the race, each window net will be autographed and be offered in an auction hosted by the NASCAR Foundation, with proceeds benefitting a local charity. The auction will run live on eBay from Oct. 10-17.