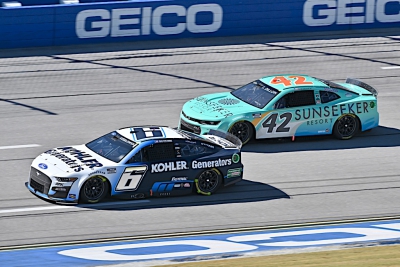 A late speeding penalty was too much to overcome for Brad Keselowski Sunday afternoon, in what was one of the more calm races Talladega Superspeedway has seen in recent years.

The six-time Talladega winner was in the mix late, riding third with 50 to go in the Kohler Generators Ford. He held that position for a number of laps until the final green-flag pit cycle of the afternoon, which in Keselowski’s case came with 28 to go. He was penalized for speeding upon entry to pit road and was forced to serve a pass-through penalty.

A late caution with seven to go put the No. 6 back on the lead lap, but a restart from the 27th position in a green-white-checkered finish was too much to overcome. In total just one caution flew for a multi-car incident, which came at lap 25. Keselowski recorded stage finishes of 17th (stage one) and 12th (stage two).

The ROVAL at Charlotte Motor Speedway is the next stop for the NASCAR Cup Series. Race coverage next Sunday is set for 2 p.m. ET on NBC, with radio coverage on PRN and SiriusXM NASCAR Radio.