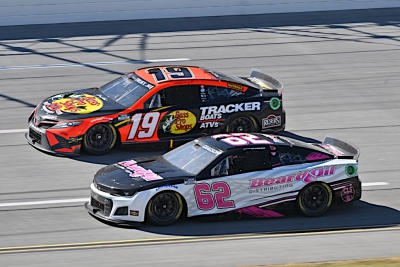 ● The driver of the No. 62 Beard Oil Distributing Chevrolet Camaro ran safely in the back of the pack during the opening laps. He was 29th when the day’s first caution flag flew for debris on lap seven.

● Allgaier reported that his racecar was free on entry and had trouble turning in the corners during those initial laps, so the No. 62 team called him to pit road for a wedge adjustment and to top off the fuel tank.

● On lap 25, Allgaier was caught up in an eight-car accident in turn one that sent him into the grass. He returned to the pits for four tires and to repair damage. He restarted in 35th on lap 30, one lap down.

● When the caution flag waved on lap 44 for a single-car incident in turn two, Allgaier was the first car a lap down and received the free pass to earn his way back onto the lead lap. He reported that his racecar was “a bit tighter than before the wreck” prior to pitting for four tires and fuel before the lap-49 restart.

● The Beard Oil Distributing driver hung back in the closing laps of the stage, finishing 31st. The team brought Allgaier down pit road during the break for scheduled service.

● In the initial laps, Allgaier stayed back in 33rd and raced conservatively, but he struggled to find speed.

● Due to strong winds and previous damage to his racecar, Allgaier lost the draft and reported that he felt as if the car kept getting slower. The team planned to stay out as long as possible while the field cycled through green-flag pit stops in an effort to get a good reading on the racecar, all while hoping for a caution.

● The caution did not occur, forcing Allgaier to the pits for fuel on lap 105. He returned to the race in 32nd.

● The remainder of the stage was caution-free. Allgaier was unable to overcome the issues with his racecar and finished 32nd, two laps down. The team pitted during the break for four tires and fuel.

● The Spaulding, Illinois-native started the final stage two laps down, but still managed to keep pace with the lead pack.

● With 34 laps to go, Allgaier opted to bail out of the lead pack as “they were getting squirrely.” He reported that he was too tight all around the track.

● The No. 62 Beard Oil Distributing Chevrolet Camaro came down pit road with 27 laps to go for a fuel-only stop.

● On lap 184, Allgaier came back down pit road for his last stop of the race for right-side tires and to top off the fuel tank.

● Allgaier finished the race in 30th, two laps down to the leaders.

●  Chase Elliott won the YellaWood 500 to score his 18th career NASCAR Cup Series victory, his fifth of the season and his second at Talladega. His margin of victory over second-place Ryan Blaney was .046 of a second.

●  Twenty-seven of the 37 drivers in the YellaWood 500 finished on the lead lap.

“Obviously, it’s kind of a bittersweet ending to the day, but I’m really thankful to the Beard family and everybody that’s on this Beard Motorsports 62 team. The first incident, we were kind of out there mixing it up a little bit, just trying to make sure the other teams knew that we had a car capable of running up front, but we got a little too much damage. From there, that just put us behind the eight-ball. We rode around and did all the things we needed to do all day but it just didn’t work out for us. I hate it for the team, I hate it for all the partners, obviously Beard Oil and everybody who supports the Beard Motorsports team. Just a bummer ending to a good day.”

The next event on the NASCAR Cup Series schedule is the Bank of America Roval 400 on Sunday, Oct. 9 on the Charlotte (N.C.) Motor Speedway Roval. The race starts at 2 p.m. EDT with live coverage provided by NBC and SiriusXM NASCAR Radio.