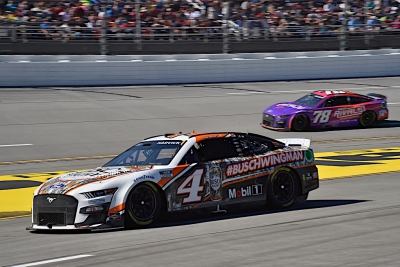 Playoff Standings (With one race to go before Round of 8):

●  Briscoe earned his sixth top-10 of the season and his first top-10 in four career NASCAR Cup Series starts at Talladega.

●  Briscoe’s 10th-place result bettered his previous best finish at Talladega – 11th, earned in his first start at the track in April 2021.

●  Briscoe finished 10th in Stage 2 to earn one bonus point.

●  Almirola earned his 14th top-15 of the season and his 16th top-15 in 26 career NASCAR Cup Series starts at Talladega.

●  Since joining SHR in 2018, Almirola only has two finishes outside the top-15 at Talladega.

●  Almirola led seven times for a race-high 36 laps to increase his laps-led total at Talladega to 107.

●  Custer led once for two laps to increase his laps-led total at Talladega to 10.

●  Chase Elliott won the YellaWood 500 to score his 18th career NASCAR Cup Series victory, his fifth of the season and his second at Talladega. His margin over second-place Ryan Blaney was .046 of a second.

●  Twenty-seven of the 37 drivers in the YellaWood 500 finished on the lead lap.

“It was tame race in the sense there was no wreck, but I think that was the most racy race from start to finish. We barely ever ran single-file and these cars – it’s so hard to make up ground. It seems like track position is such a big deal and you’ve got guys pushing so hard, just trying to maintain the lane that they’re in. I guess from my side of things, it was really racy because you’re never really riding around. You’ve got to go so hard all the time and shove the guy in front of you. We never really got single-file around the top, but I was surprised we didn’t see a wreck. I was figuring with how out of control these cars are when you get pushes from the back, especially the big ones we were having there toward the end, I figured something was gonna happen. I’m glad there wasn’t anything happening, but it was kind of a surprise to me.” – Chase Briscoe, driver of the No. 14 Magical Vacation Planner Ford Mustang

The next event on the NASCAR Cup Series schedule is the Bank of America Roval 400 on Sunday, Oct. 9 on the Charlotte (N.C.) Motor Speedway Roval. It is the sixth race of the 10-race NASCAR Playoffs and the final race in the Round of 12. The Bank of America Roval 400 starts at 2 p.m. EDT with live coverage provided by NBC and SiriusXM NASCAR Radio.

Rate this item
(0 votes)
Tweet
« CHEVROLET NCS: Chase Elliott Advances to Round of 8 with Triumph at Talladega Kyle Busch, No. 18 M&M'S Toyota Camry Race Recap for the YellaWood 500 »