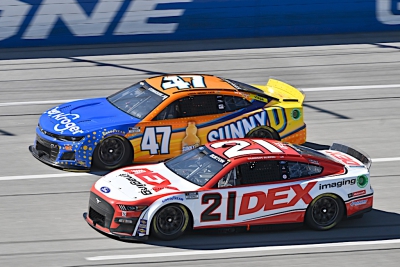 Harrison Burton and the No. 21 DEX Imaging Mustang made an early exit from Sunday’s YellaWood 500 at Talladega Superspeedway after a drafting push from Ricky Stenhouse Jr. didn’t produce the desired result and sent the No. 21 Mustang slamming into the outside wall.

Burton was running around the top 10 and had just pulled into the lead of a third lane down the frontstretch on Lap 23 when the accident occurred.

Unable to continue, Burton was left with a 36th-place finish.

“I know [Stenhouse] hit me, and as soon as he did I was crossed up and going side-to-side,” Burton told reporters at the track after being checked out at the care center. “I don’t know what to do different.

“I pulled up kind of conservatively to give him time to prepare…[Stenhouse] gave me a pretty hard shot for sure, but I don’t know if it was off line, where he was when he hit me, or if I was moving while he was moving.”

Burton said wrecks in the pack at Talladega happen in a hurry.

“All of a sudden you’re sideways,” he said. “You know you got hit, and you don’t understand what really caused it.

“It’s unfortunate for us. I felt like we had a good DEX Imaging Ford Mustang. We were going to go and try to make a move to get out front and try and control track position and all of a sudden you go sideways.

“It’s pretty sad….We’ll just try and keep it going and get some momentum going in the right way.”

The No. 21 team now turns its attention to the road course at Charlotte Motor Speedway and next Sunday’s Bank of America ROVAL 400.