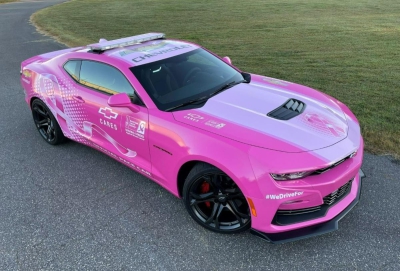 Chevrolet’s partnership with the American Cancer Society (ACS) and its “Making Strides Against Breast Cancer” initiative marks its 12th consecutive year in 2022. A specialty-themed pink Chevrolet Camaro SS 1LE will return to the track as the official pace car for three NASCAR Cup Series races during the month of October, which is Breast Cancer Awareness Month.

Proudly carrying the ACS logo, the pink Chevrolet Camaro pace car will do more than just lead NASCAR’s premier series under caution. For every lap run under caution in three select races, Chevrolet will donate $350 to the American Cancer Society to honor “Making Strides Against Breast Cancer.”

“We are honored to represent the American Cancer Society on our pink Chevrolet Camaro SS 1LE pace car during the month of October,” said Todd Christensen, Senior Manager, Chevrolet Motorsports Strategic Marketing and Operations. “As a proud partner of ACS, we are grateful to continue our support for the cause and look forward to bringing awareness of the initiative back to the track.”

Chevrolet is ready to rev up awareness for the initiative this weekend at Talladega Superspeedway, with the YellaWood 500 on Sunday, October 2, marking the first of three NASCAR Cup Series events that will be a part of the program. The specialty-themed Chevrolet Camaro SS 1LE will make its return appearance as the official pace car at Homestead-Miami Speedway on October 23, followed by Martinsville Speedway on October 30. In 2021, caution laps generated among the three participating races hit the threshold, generating a $50,000 donation towards the American Cancer Society.