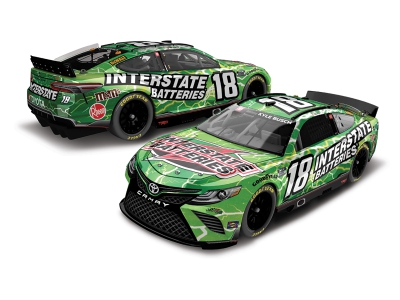 While Kyle Busch hails from Las Vegas, Sunday’s AutoTrader EchoPark Automotive 500 NASCAR Cup Series race at Texas Motor Speedway in Fort Worth is a home game of sorts for the driver of the No. 18 Interstate Batteries Toyota for Joe Gibbs Racing (JGR). That’s because the headquarters for Interstate Batteries, which returns as primary sponsor on the No. 18 Toyota for the final time in 2022, is located just 35 miles from the 1.5-mile Texas oval as the company is celebrating their 70th Anniversary year.

On top of his four Cup Series wins at Texas, Busch has been a frequent visitor to victory lane there in other NASCAR series. He reeled off a string of five consecutive NASCAR Xfinity Series wins there from April 2008 to April 2010, then scored five more wins in April 2013, November 2014, and April 2016, 2019, and 2021. Add his five NASCAR Camping World Truck Series wins in November 2009, 2010, 2014, 2019 and 2020, and Busch hits town this weekend with 19 NASCAR national series wins in Interstate Batteries’ backyard.

This weekend’s race at Texas marks the opening of the Round of 12 of the 2022 Cup Series playoffs. Unfortunately for Busch, who made the 16-driver elimination-style playoff field for the ninth year in a row, his strong runs Sept. 4 at Darlington (S.C.) Raceway and last Saturday night at Bristol (Tenn.) Motor Speedway were thwarted by engine issues that led to his early exit from this year’s championship chase. It marks the first time he did not advance beyond the Round of 16 since the current playoff format was instituted in 2014.

With Interstate Batteries on Busch’s No. 18 for the final time this season, and as fall is in full swing with winter quickly approaching, Busch is encouraging race fans to stop by a local Interstate dealer to get their vehicle batteries checked, stressing that the cold weather of winter can adversely affect a car’s battery.