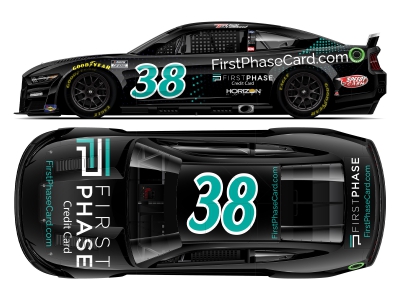 This weekend, Todd Gilliland and the First Phase Ford Mustang team return to the Texas Motor Speedway. The team raced at the track earlier this year during the NASCAR Cup Series All-Star weekend. Gilliland now returns for Sunday’s 500-mile race.

Sunday’s race is the final 500-mile race on a mile-and-a-half track of the season. It comes at a track that has been one of the most challenging in terms of passing. Gilliland talks about the work ahead to be successful on Sunday.

“First, this is going to be a long race,” said Gilliland. “Five Hundred miles, I’ve never raced this race, but I know it’s going to be a long day. So, you have be prepared mentally and physically for that challenge. Then, you have to think about the track. We know that it’s been tough to pass on. We all love that bottom and it’s really slick up top. I think eventually throughout the day the track takes some rubber and it gets better, but we need to really think about strategy."

“We must think about that final 100 miles of the race. We need to be on the Lead Lap, first and foremost. Then, you have to have tires left in the pits to put on. Finally, you must think about what is needed to be near the front at the end. That’s a lot for the crew chief, engineers, and myself. We need to be on the top of our game all afternoon.”

Gilliland will have First Phase on his No. 38 Ford Mustang on Sunday. First Phase has been the cornerstone partner of Gilliland during his rookie campaign.

Gilliland and the No. 38 First Phase team will race on Sunday at 3:30 p.m. ET on the USA Network.